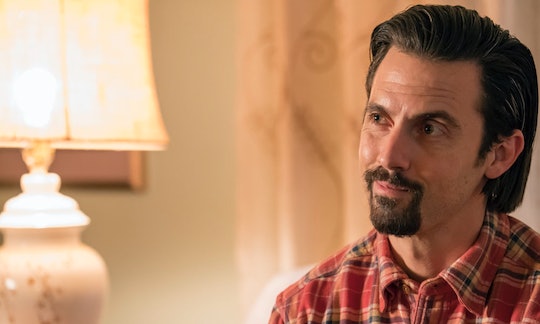 Jack's Time In Vietnam Begins On 'This Is Us' & Yes, It Hurts

Season 3 of This Is Us has already tackled so much. Between Kate's infertility and Toby's medicinal sacrifice, Randall's ongoing identity crisis, and Kevin's new relationship with Beth's cousin, Zoe, it's hard to believe there's still more story to tell. The next installment promises to follow Jack's time in the Vietnam war and how that time affected him later in life. This chapter matters because it helps connect who he becomes to his kids and his wife and the mysterious life (and death) of little brother, Nicky. With that said, how long was Jack in Vietnam on This Is Us?

According toVulture, a chronological timeline of This Is Us events suggests Jack went into the war in 1969 when Jack was 25 years old. They list the exact date as December 1, 1969 to note when he's drafted. This is also when he receives the all-important necklace with the Buddhist symbol of "purpose" on it (and the necklace Jack eventually gives to Kevin). Because of when the first Vietnam war draft actually happened (December 1969), it seems as though Jack went in as one of the first draft rounds, just like in real life.

It's hard to pinpoint exactly how long Jack is in Vietnam — and maybe the next few episodes will spell it out — but Jack and Rebecca's first date which was just shown in the Season 3 premiere, happened in December 1972. That's when a shy, awkward (and broke) Jack revealed he served and had only just gotten back, but didn't like to talk about it. If this timeline proves true in the fictional scope, Jack would've been in Vietnam for approximately two years. Look, Mom, — I did math.

As far as what Jack endured during his time in Vietnam, it remains to be seen. The This Is Us Season 3, Episode 4 promo gives you a a few hints at what's in store, but the way this show operates, it's not the whole story. "He's my little brother," Jack said in the clip, referring to Nicky. "It's my job to take care of him. That is my only job." Are you crying? Because I'm definitely not. In last week's episode, Jack's father mentions Jack not looking out for Nicky, almost hinting at Jack being the one to blame for Nicky's death and a) how dare you, sir? b) you're doing great, Jack, sweetie, and c) who's the injured soldier Jack's holding in the promo if it's not Nicky? So many questions, so little time.

When asked what Jack may have carried all those years later after his father said something so hurtful, co-showrunner, Isaac Aptaker told Entertainment Weekly, "a lot of the heaviness and the sort of angst and burden that Jack carries around him throughout his life is very much connected to that line and what happened to his brother, and we’re going to start exploring that next week."

Aside from the few mentions of Nicky (who supposedly died in Vietnam), a brief outburst over Kevin's antics with a toy war prop, and his Season 1 alcoholism, Jack's been pretty private about what really happened over there in his apparent two years' time served. It's understandable since war is generally something most are traumatized or affected by, in some way. At the very least, Jack losing his brother through this time should be enough to shape him. Though, Refinery 29 theorizes Nicky may not have actually died. Talk about a twist and something TIU writers are totally capable of doing to your heart strings. Plus, Jack lied about being a mechanic in Vietnam when he served so it's possible (probable) there's a lot more viewers don't yet know about Papa Pearson so grab the popcorn.

Last week's episode also hit on the fact that Kevin — one of Jack's triplets — knows so little about his father, he plans to goes to Vietnam. As much was shown in the Season 2 finale with Kevin and new girlfriend, Zoe (aka Beth's cousin), on a plane. But it's not clear what Kevin will do once he gets to Vietnam or what steps he'll take beforehand. One clue came from Kevin locating and emailing a former serviceman who supposedly served with Jack in Vietnam — Mr. Robinson. Though at this point, this man may not want to remember or talk about his time in the war. Understandably so.

Tuesday night's episode may not fill in all the holes to Jack's story, but at least there will be some answers as to what happened during that two-year stint in Vietnam. Even if there's no mention of Nicky, or another reference to Mr. Robinson, I'll still stockpile all the tissues I can find. Just to be safe, you probably should, too.