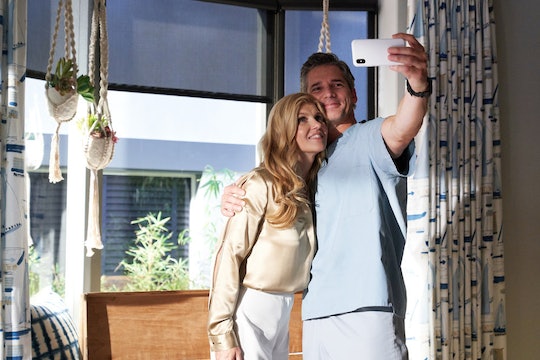 Secrets Will Come To Light On 'Dirty John'

By the end of Dirty John's second episode, Debra had indisputable evidence that her boyfriend John wasn't who he claimed to be. She discovered a drawer full of papers that proved he had a history of violent behavior. He had also been in jail. But there's a lot Debra still doesn't know about his past, like how long John Meehan was in prison. The real story the show is based on does have those all-important answers.

Both on the show and in real life, a letter arrived for John Meehan from jail that made Debra Newell realize that he was hiding things about his past. John reacted to her intercepting his mail with anger and brushed it off as social outreach; he was simply helping someone out who was in jail. He did not admit to being in jail himself. However, Debra finding John's old records was enough to contradict that lie.

The real story of Meehan and his involvement with Newell inspired an L.A. Times article and podcast of the same name by Christopher Goffard. In the Times article, it was revealed that Meehan had been in jail multiple times over the years. The exact dates of Meehan's prison time are vague, but overall he spent a little under two years behind bars.

While working as an anesthesiologist, Meehan met a woman coming out of brain surgery. They started to date, until he tried to get money from her and she refused. Then he turned threatening. He blackmailed her and demanded money, or else he would, in his words, "be your nightmare." Once the police became involved, they found some highly suspicious items in Meehan's storage unit, including a gun, binoculars, cable ties, syringes, and cyanide.

He was awaiting trial in Orange County towards the end of 2013 and pled guilty to stalking in February 2014. He was out just a few months later in the summer of that year. Shortly after, he was jailed again for violating a restraining order against a different woman. He was released again on Oct. 8, 2014, at which point he met and married Newell.

That wasn't the extent of Meehan's arrest history, either. His first wife Tonia Sells found the surgical anesthetics Versed and Fentanyl in their home in 2000 and alerted police. In 2002, Meehan pled guilty to felony drug theft and was in prison in Michigan (where he lived at the time) for 17 months. He was released in 2004.

That doesn't even take into account Meehan's other run-ins with the law. While awaiting trial in 2013, an inmate claimed Meehan had been looking to hire someone to kill two detectives and five other witnesses to his various crimes, because he believed there would be no trial without witnesses. One of the detectives tried and failed to get a restraining order against Meehan. His sister Donna got a court judgement against him for $90k she'd lent him, too.

Meehan's repeated infractions created a history that made Newell wary for a very good reason. And on Bravo's Dirty John, it looks like it's all about to come out.