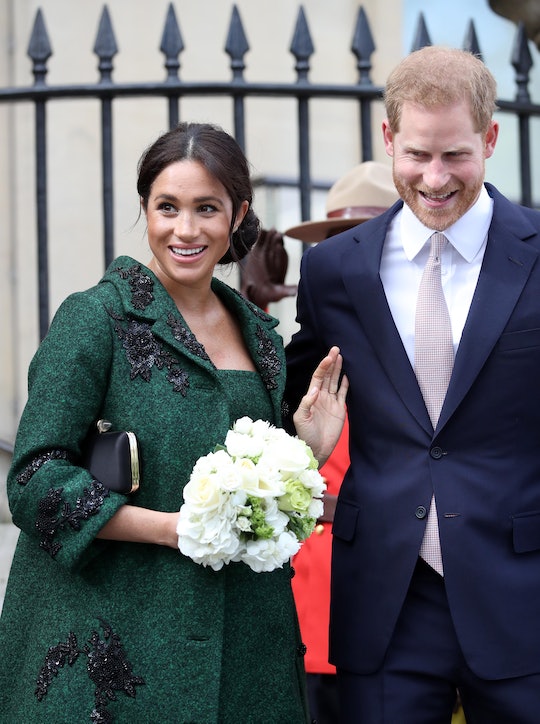 As Meghan Markle's Due Date Gets Closer, Here's How Long Her Maternity Leave May Be

Royal watchers are keeping a close eye on the Duchess of Sussex these days, as she is far along into her first pregnancy. And as her due date approaches, many are likely wondering about the sex of the baby, when he or she will be born, and how long Meghan Markle’s maternity leave will be. Because, in case you haven't noticed, the royal mom-to-be is already scaling back on appearances...

While there’s no official policy on maternity leave for royals, the decisions Kate Middleton made about her three maternity leaves can be a bit of a guide. According to OK! Magazine, Middleton took just two months leave with the birth of Prince George, five months with Princess Charlotte, and seven months with Prince Louis. So, seeing a six or seven-month leave for Meghan Markle wouldn’t be out of the question. Therefore if she gives birth in April or May, one could expect to see her out and about in the fall.

But Markle does seem to love her work and is generally glowing during public appearances. So she may opt to take a shorter maternity leave and get back to work. Or she may slowly work in a few appearances over time and build back up to her regular schedule. And, don't worry too much, as the public may get to see her at family events. For instance, Middleton attended an Easter church service with the family during her leave for Prince Louis, as well as the wedding of Prince Harry and Markle, as Harper's Bazaar reported.

We may have already seen the last of Markle in public until the baby is born, as the Daily Mail reported. A source said that the Duchess of Sussex doesn't have any more work planned, following her attendance at the Commonwealth Day service at Westminster Abbey on March 11. That being said, Markle and Prince Harry did show up at the christening of Zara Tindall's daughter, Lena, on March 17, as People reported.

Buckingham Palace wouldn’t confirm whether it’s officially maternity leave, but did tell the Daily Mail that Markle “did not currently have any more official engagements scheduled, but will attend several private meetings.”

Nobody would criticize if Markle has decided to start her leave as she also has a big move coming up. The couple are leaving their home at Kensington Palace to take up residence at Frogmore Cottage at Windsor Castle, according to Cosmopolitan. There are a lot of renovations taking place to transform the residence from the staff quarters it has been used for into a home. One of the reported changes is creating a space for Markle’s mother, Doria Ragland, as Cosmopolitan reported.

As Markle's due date inches closer and closer, it's likely that she'll be taking it easy to prepare for her baby-to-be. But hopefully — if she does follow in Kate Middelton's footsteps, as the mom of three has been photographed with her newborns hours after delivering — the world will get to see the Duchess of Sussex alongside Prince Harry as they introduce their bundle of joy.