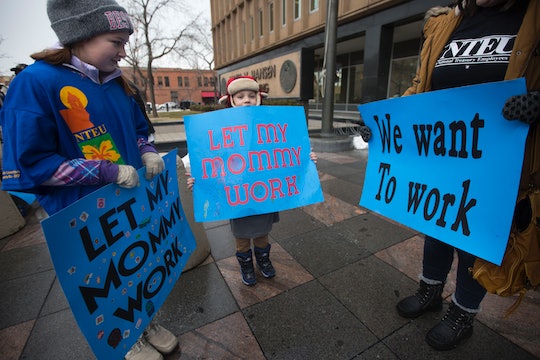 Not everyone may have been aware when the government first shut down but, at this point, it's impossible to ignore its effects. In the midst of the longest shutdown in U.S. history, it's fair to wonder how long the government shutdown will last this time around. Because, with no end in sight at the moment, families across the country are struggling to make ends meet.

The government shutdown started on Dec. 22, 2018, exactly one month ago today, after President Donald Trump tried to include $5.7 billion in funding for a border wall. Although government shutdowns typically only impact some "nonessential" offices, departments, and activities, many Americans are still affected, especially since this current government shutdown is now the longest in U.S. history, according to TIME.

According to TIME, about 800,000 workers have been impacted by this shutdown. What's more, SNAP benefits, also known as food stamps, are being impacted, too, and although February benefits came early, people may not receive their benefits in March, according to The Root.

Additionally, according to WCBS, five of the six agencies serving Native Nations are shut down, including health care, law enforcement, and social services. And programs like WIC will soon not receive federal funding, according to Business Insider, and will rely on state or local funds. If those state or local funds run out, there will be nothing to fund such a necessary program.

Government shutdowns are no small thing and people are beginning to really struggle. Rent and bills don't go away, after all. So, when will the shutdown end?

The government only reopens when Congress passes a spending bill and Trump signs it into law, according to Vox. This means that a shutdown, technically, could last indefinitely. On Jan. 4, Senate Democratic Leader Chuck Schumer told reporters, according to CNN, that Trump "said he'd keep the government closed for a very long period of time — months or even years."

However, it's unlikely that is something Trump will actually pull off. The federal government continues to partially function due to the labor of its furloughed workers. But, people's patience (and resources) can only last so long.

On Jan. 21, Chairman of the Democratic Coalition, Jon Cooper, tweeted that "massive protests are being planned by federal workers and labor unions" that will happen on Wednesday, Jan. 23, to demand that Sen. Mitch McConnell and "his GOP cronies in the Senate open up the government with no strings attached." In another tweet, Cooper wrote that if the government wasn't opened, "federal employees and their supporters will protest at the Hart Senate Office Building at 12 noon on Wednesday."

The pressure of more protests will definitely put additional pressure on the government to end the shutdown. And although it's unlikely, the end could be near. As Sheryl Gay Stolberg from The New York Times tweeted on Tuesday, Sen. McConnell and Sen. Schumer have "agreed to put both the Trump shutdown bill and a Dem proposal, already passed by the House, up for votes on Thursday... Both would reopen government immediately. House bill would extend funding for all shuttered agencies including Homeland Security."

This isn't the first time proposals to end the shutdown have been discussed. Recently, according to CNBC, the Senate released a bill reflecting an offer Trump made to reopen the government. It would put $5.7 billion towards building the wall, along with funding technology to find drugs at ports and thousands more border patrol agents, as outlined by CNBC. As an appeal to Democrats, Trump offered to extend legal protection for undocumented immigrants brought to the U.S. as children and people fleeing humanitarian disasters, as reported by The Washington Post.

However, it is extremely unlikely that a bill like this will pass. According to News Channel 6, Sen. Schumer's office stated that Democrats will not negotiate any border security funding until Trump opens the government.

There is no guaranteed answer for when the government shutdown will end. But, if federal workers do strike en masse, it is unlikely that the shutdown will be maintained for much longer.

It's certainly not easy to be caught in the middle of this shutdown, but fortunately there are ways to help those who are struggling.