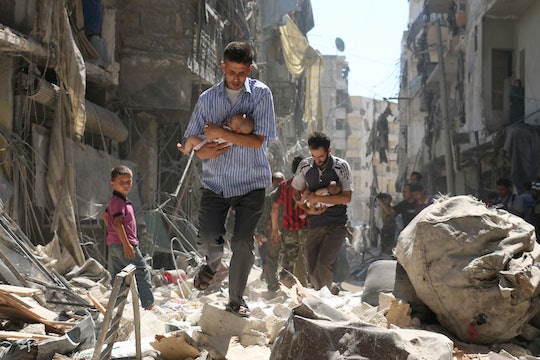 How Long Will The Syrian Ceasefire Last? The Military Has Agreed To A 7-Day Truce

A ceasefire deal brokered by the United States and Russia was scheduled to come into effect around noon on Monday, but as with so many factors of the deal, many doubts remain about how effective it will actually be. How long will the Syrian ceasefire last? The agreement put forth by the two countries is based upon both the Syrian military (under President Bashar al-Assad) and the Syrian opposition to agree to at least a seven-day truce — something which the Syrian government has reportedly agreed to in an announcement on state TV, according to USA Today.

Most of the groups making up the opposition have also agreed to abide by the rules of the ceasefire, though at least one — Islamist group Ahrar al-Sham — denounced the plan, arguing that it was an unfair "half-solution" it could not accept. Regardless of each side's stated position though, what will really determine the success of the ceasefire will be whether or not the violence actually continues, since it's still to be seen whether anyone actually intends to play by the rules.

The Syrian deal has been criticized for having a number of downsides and weaknesses, and it also seems questionable that, if all goes well, the plan will result in the United States and Russia working together despite their blatantly different positions. But, as CNN noted, the current ceasefire in Syria is the first step forward in months of unsuccessful attempts at a deal, and likely represents the best option possible at the moment, given that the conflict in Syria is so complex. In short, the ceasefire plan will attempt to put a stop between the violence between Assad's government and the various Syrian rebel groups that make up the opposition, in an attempt to ease the ongoing violence civilians have endured as a result of the five-year civil war.

If all parties involved adhere to the ceasefire, for example, CNN explained it would be possible to provide "humanitarian access to parts of Syria such as Aleppo," and would contribute to the creation of demilitarized areas, which are much needed. According to The Guardian, Turkey has said that more than 30 aid trucks are ready to be sent into Syria under UN supervision to deliver supplies to the war-torn country, where 300,000 people have already died as a result of the violence. It would then also potentially allow the U.S. and Russia to join forces to fight ISIS and former al Qaeda-linked group Jabhat Fateh al-Sham (JFS).

As for how likely that is of actually happening? Well, it depends on who you ask. The biggest initial roadblock to the plan, of course, would be that one or both groups opts not to adhere to the ceasefire, rendering it essentially useless. But even if the truce is upheld, there is still a lot of difficulty lying ahead. In an interview with BBC Radio 4, former British foreign secretary David Miliband said that the fact that the United States and Russia represent such vastly differing views on Assad means that the deal is inherently built on shaky ground, according to The Guardian:

If there are enough short-term interests that join the Americans and the Russians, then those of us on the humanitarian side have got a chance to try and make a difference for 17 million benighted people within the Syrian territory. The great difficulty is going to come down to the future of President Assad, because obviously in the west he is perceived as someone who has not just murdered many of his own citizens but has radicalized those who are still there. On the Russia side they see him as the great hope. And there is nothing in this agreement that gets over that fundamental division.

As Vox has noted, there's also the fact that, the Assad-run government and the opposition are fighting — and likely will continue to fight — over the fact that currently, control of the country is held by a Alawite religious minority, when 90 percent of Syrians are actually Sunni Muslims. The opposition wants Assad and his government gone, even if it means working with groups like JFS to make that happen. And with countries like Russia and Iran (not to mention groups like Hezbollah) who have a vested interest in supporting the Assad regime, according to Sky News, it's clear that there is still a long, complicated road ahead before any real talk of peace can even begin.

Then again, none of these eventual concerns will make much of a difference if the initial seven-day ceasefire provision can be met. So for now, it seems, the big question will be watching and waiting to see whether each side will hold up its end of the bargain. But hopefully, for all of the Syrians currently living amid the violence, they will.