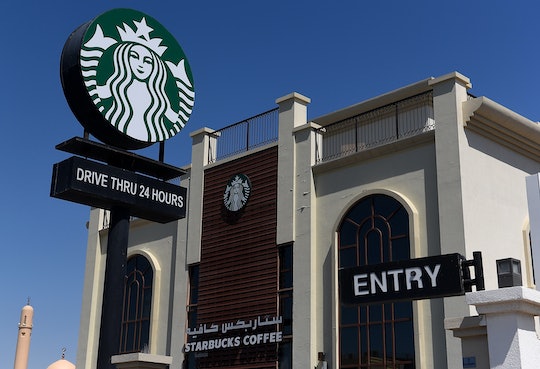 Get The Elusive Unicorn Frappuccino Before It's Gone

The Unicorn Frappuccino is here, y'all. The bright pink and blue blended drink landed in participating Starbucks locations on Wednesday — and needless to say, people have not stopped talking about it in the past 24 hours. The drink is fun to look at and depending who you ask, is pretty tasty. But it's not going to be around forever. So if you're wondering how long the Unicorn Frappuccino will be available at Starbucks, then you might not want to wait around to get your hands on it. Procrastinators beware.

Like the mythical creature, the Unicorn Frappuccino sounds pretty elusive — and looks like something concocted in your wildest imagination, too. With its colorful hues, the drink looks like something straight out your kid's coloring book, rather than a drink from your nearby coffee shop. From personal experience, the Frappuccino tastes just as whimsical — it's both fruity and sour, and gives you a pure sugar rush all at the same time. Officially, Starbucks describes the fun drink as a "creme Frappuccino with mango syrup and layered with a pleasantly sour blue drizzle." But the really exciting part about the drink is that it changes color and flavor with every stir and sip from your straw. So yes: The Frappuccino is definitely worth the order, not only for its taste and photogenic qualities — but also for the fact that it won't be around for much longer.

After landing in participating stores on Wednesday, April 19 the drink is only available in those stores until Sunday, April 23 or until supplies last, according to Starbucks. This gives everyone five days to try out the Frappuccino, or take a photo of it for their Instagram account, before it's gone for good.

The verdict as to how the drink tastes is up to the beholder — based on the reviews, the Frappuccino isn't something that is universally liked (but that all depends on who you ask). The Washington Post perfectly describes the drink's taste "like sour birthday cake and Instagram likes" — and if that doesn't convince you to purchase the drink before Sunday and try it yourself, I don't know what else will.

It won't be long until people begin to question whether or not the Unicorn Frappuccino existed at all — or if it was a myth this whole time. Seeing and tasting the majestic drink is believing in it — but you'll only have a limited time to do so. Don't let the moment slip away before it's too late.

More Like This
Mama Mia! Ronzoni Announces Beloved Pastina Is Discontinued & The Internet's Lost It
Alex Guaranschelli Is A Renowned Chef, But Her Daughter Still Gets Recipe Inspo From TikTok
David Moscow Gave His Mom Two Grandkids & She's Still Holding Recipes “Hostage”
25 Cookie Recipes Without Eggs That Are *Still* Delicious