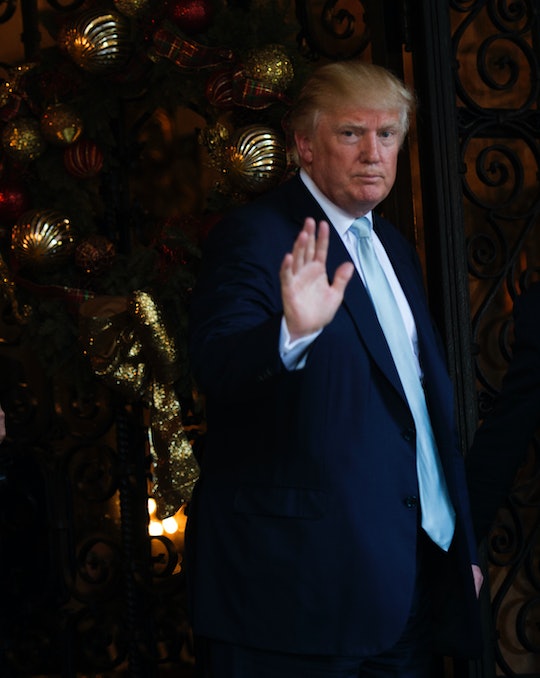 If Trump Were Impeached, He Could Be Out In Days

President-elect Donald Trump may have won the Electoral College vote, but he lost the popular vote by the widest margin in history, and he'll be taking office as the only president ever voted in without any prior governmental or military experience. With that and a large number of Americans protesting his presidency, some are wondering: hypothetically, how soon could Trump be impeached after becoming president of the United States? Trump's campaign has not responded to Romper's request for comment regarding the different reasons he could be impeached or regarding critics claims that he should be impeached.

That depends on a few factors. For a president to be impeached, the House of Representatives must decide that there are grounds for impeachment, such as "treason, bribery, or other high crimes and misdemeanors." The House Judiciary Committee puts together a case for the president's impeachment, the House of Representatives votes on that case, and then the president stands trial in the Senate. For the president to be successfully impeached, two-thirds of the Senate must vote to convict him or her.

So how long would it take to start an impeachment process against Trump? According to Vanity Fair, some experts think he could be impeached immediately. (Tough break for the president-elect.) Law professor Christopher Lewis Peterson argued in one paper that Trump could be impeached if Trump University was deemed fraudulent, and political historian Allan Lichtman predicted in November that Trump would eventually be impeached.

"I'm quite certain Trump will give someone grounds for impeachment, either by doing something that endangers national security or because it helps his pocketbook," Lichtman told The Washington Post in November.

However, no president has been impeached due to misdemeanors that took place prior to him taking office, so Peterson's Trump University argument could fall short. Even if Trump had grounds for impeachment during his presidency, a Republican-controlled Senate would be unlikely to vote him out, since a move like that would be fairly damaging to the party. As Vanity Fair pointed out, George W. Bush's administration allowed detained people in Guantanamo Bay to be tortured, yet he still was not impeached — while Clinton was impeached over an affair.

Those hoping for a Trump impeachment might also be disappointed to find out that — in the event of Trump essentially being fired from his presidential role — Vice President-elect Mike Pence would be the one to take his place. In light of unlikely impeachment and a Pence presidency, some have argued that dissenters' best option is to start planning now for a strong campaign against Trump in 2020, rather than toppling him from power in January.