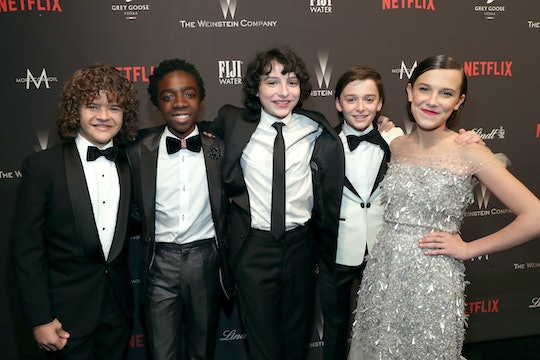 Although the competition has certainly gotten tougher these past few years, what with other streaming sites churning out equally impressive shows, such as Hulu's The Handmaid's Tale and Amazon's Transparent. But Netflix has still had a solid year. The streaming service released a lot of new shows in 2017, like the much talked about teen drama, 13 Reasons Why, based on the bestselling novel of the same name. Then there was the '80s comedy GLOW, which starred Alison Brie, and who could forget the new crime drama, Mindhunter, starring Jonathan Groff, which also got resounding reviews and was definitely expected to get a few nominations this year.

Along with that, many of Netflix's popular series also returned this year with new seasons, including The Crown, Master of None, Stranger Things, and House of Cards. Suffice to say, the streaming platform had a lot to be proud of this year. Therefore, Netflix was primed to get an impressive number of nominations, which is why it's not surprising that they did.

In total, Netflix walked away with nine nominations, coming in second after HBO, which received a total of 12 nominations this year. Netflix nabbed most of its nominations this year in the drama categories. The Crown and Stranger Things both got nominated again for Best Television Drama Series; last year, The Crown won the award, though this year it has tough competition since it's up against both The Handmaid's Tale and Game of Thrones.

Claire Foy was also nominated again for Best Performance by an Actress in a Television Series — Drama and this year she'll be going up against 13 Reasons Why star Katherine Langford. Last year, Foy's nomination was her first Golden Globe nod and it then became her first win. This will be the last time Foy can win a Golden Globe for her role as Queen Elizabeth II, because after Season 2, Olivia Colman will be replacing her on the show.

For Langford, this is her first nomination and it's the only nomination 13 Reasons Why received. Although the show — which follows Langford's character, Hannah Baker, as she explains on tape the 13 reasons why she ended her life — sparked a lot of controversy, it also did very well. Executive-produced by Selena Gomez, the show has already been picked up for a second season, which is currently in production.

Surprisingly, Stranger Things star Millie Bobby Brown wasn't nominated for a Golden Globe this year, but her costar David Harbour, who plays the lovable police chief, Jim Hopper, was nominated in the Best Supporting Actor category. Besides his amazing dance moves, Harbour did an incredible job in the second season, and the nomination is definitely well deserved.

Noticeably missing for the nominations this year was House of Cards. Whether it has anything to do with the controversy surrounding Kevin Spacey or not is difficult to say, but the fact that Robin Wright didn't get a nomination for her work in the past season is certainly surprising.

You can find out how many Golden Globe wins Netflix walks away with this year when the 2018 Golden Globes airs on Sunday, Jan. 7 at 8 p.m. EST on NBC.