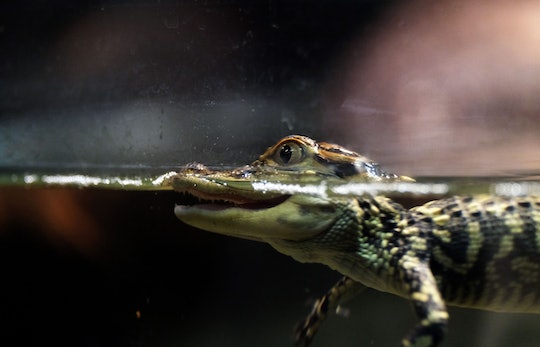 How Many Alligators Are At Disney? Experts Say It's Hard To Tell

On Tuesday, 2-year-old Lane Graves was drowned by an alligator when on vacation at a Disney resort in Orlando, Florida. Not only was this a horrible, tragic event, but it's even more shocking that it happened at such a popular family destination. The boy had been wading in less than a foot of water at a beach along the Grand Floridian Resort during an outdoor movie event when the alligator dragged him into the water. Experts agree that attacks like this are rare, but how many alligators are at Disney?

According to CNN, alligators are not likely to take on animals they don't think they can defeat. The odds of being attacked by an alligator, even in Florida, are just one in 2.4 million. That said, the odds are much better for small children. CNN brought in alligator expert and TV personality Jeff Corwin to discuss alligators' behavior. He said that they are generally "ambush predators" who will attack prey "from the shoreline." The little boy probably caught this alligator's attention by splashing on the shoreline like a smaller animal. Moreover, officials reported that the incident happened around 9 p.m., which is when alligators are most dangerous. Being nocturnal, they feed just after dark.

It's difficult to say how many alligators are at Disney. The entire resort is connected by a lagoon system that opens to a wildlife area. Alligators could easily come and go in the lagoons, and alligator sightings are a regular occurrence. CNN reported that in the state of Florida, there are an estimated 1.3 million alligators, according to Arnold Brunell of the Florida Fish and Wildlife Conservation Commission. According to the commission's data, since 1973 at least 23 people have been killed by alligators in the state of Florida, many of whom were children.

The park does not release numbers about the alligators in its lagoon waters, nor does it keep track unless there is an issue. According The New York Times, Sheriff Demings emphasized the rarity of this incident. He said that the resort has been in operation for 45 years, and it has never had an attack like this, nor had any “nuisance alligators” been reported in the area. That said, in the course of the investigation, five alligators were taken out of that same small lagoon and euthanized in order to ascertain which had been the attacker.

The bottom line is that alligators, though seemingly slow-moving, are unpredictable and dangerous. It's safe to assume that alligators may be present in any body of water in Florida, even those that are patrolled and populated. Though some families may be put off visiting Disney, in all likelihood the park will become much safer and much more vigilant as a result of this horrific accident. Alligators are not tourist attractions — they're wild animals — and no matter how family-friendly a shore may seem, exercise extreme caution.