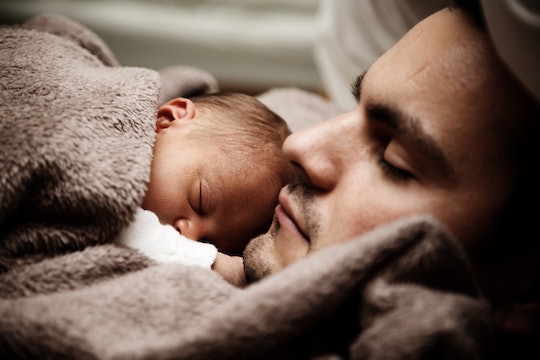 When Done Improperly, Co-Sleeping Can Be Incredibly Deadly

Sometimes, it seems like the only way to get a baby to calm down and stop crying is by holding them all the time — even at the most inconvenient times. And when a baby continues to cry every two hours throughout the night, the one thing you wish you could do is bring your child to bed with you. While co-sleeping definitely has its benefits, it also can have its downfalls. For many parents, co-sleeping could be a gamble, which begs the question how many babies die from co-sleeping and is it something to be hesitant of?

Before I go in to the details, it is important to really define co-sleeping — which is a pretty broad term — to clear the air about deaths related to co-sleeping. According to March of Dimes, co-sleeping is sleeping close enough to your baby so you can see, hear, smell, or touch each other. This could involve having the baby sleep in a bassinet or crib placed close to the bed.

Bed sharing is a type of co-sleeping — when a parent and baby share a bed — and is one we hear most often about in the headlines. Bed sharing, aside from the benefits that proponents claim, can be dangerous, because according to March of Dimes, often causes Sudden Infant Death Syndrome (SIDS) or suffocation, with the former occurring at troubling rates.

So how many deaths has co-sleeping caused? Quite a few, it turns out.

According to the Today show, a Pediatrics study published in 2014 found that 74 percent of deaths in babies younger than 4 months old were due to a "bed sharing situation." The study analyzed data of over 8,000 infant deaths from 24 states that occurred between 2004 and 2012. A 2013 study found that babies who bed-share are five times more likely to die of SIDS, according to MedPage Today.

However, it is hard to get an exact number of how many babies die from co-sleeping since they die of SIDS. According to Parents, fewer than 2,500 infant deaths a year will be classified as SIDS — but not all babies that die from SIDS bed share with their parents.

In spite of the lack of studies, there is not a lack of headlines. Babies all across the nation are dying from accidental death due to bed sharing, from Kansas to Louisiana. One mother in North Carolina was even sent to court and received probation for the death of her two babies that she had admitted to co-sleeping with.

While co-sleeping definitely has its benefits, bed sharing has proven to cause death for babies. While it might be tempting for mothers to let their babies sleep in their same bed, they should know it can cause accidental death and weigh the benefits.

More Like This
Even If Your Baby Sleeps Better in Your Bed, It’s Still Not Recommended
Doctors Swallowed LEGOS To Prove Everything Is Awesome For Kids Who Do The Same
Does The FDA's Plan To Limit Lead In Baby Food Go Far Enough?
What To Do If Your Toddler Keeps Taking Off Their Diaper At Night
What Parents Are Talking About — Delivered Straight To Your Inbox