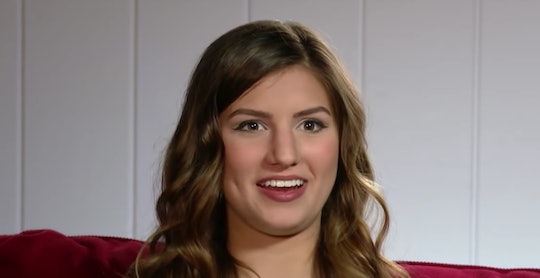 The Bates Family Is In The Midst Of A Baby Boom

The Bates brood is getting a lot bigger within the next few months. The stars of UPtv reality show, Bringing Up Bates, are a family of 19 and some of them are currently expecting. But how many Bates sisters are pregnant? There are quite a lot of them pregnant at the moment — but with a family of 19 there is bound to be some kind of overlap in pregnancies, right?

Tori Bates announced earlier this week that she is expecting her second child with her husband, Bobby Smith, less than a year after welcoming her son, Kade. The expecting mother took to Instagram where she wrote about how excited she is to be a mother of two, and told her followers all about her baby's sex, name, and due date. "We are so excited that our life after April 2020 will hold twice the adventures, giggles, grins, and hugs when we meet our second little boy, Kolter Grey!," she wrote in the caption of the post. "Most importantly, we are so thankful and in awe for the opportunity to raise two little boys that we already pray will become mighty men of God."

But she isn't the only person in her family that is currently expecting — there are four Bates siblings in total (including Tori) that will expand their families by one more.

The Bates' firstborn child, Zach Bates and his wife, Whitney, are expecting their third child, due some time next month (in November), according to People. This is a very special pregnancy for the couple because Whitney suffered a miscarriage last year. Whitney told People that her kids are so excited to have a new sibling.

"Last summer, Zach and I experienced a miscarriage," she told People. "Though our hearts were broken, we put all of our trust in God. Now, we are flooded with joy and gratefulness! The main topic around the house has been about the new baby coming and who gets to hold it first."

Third oldest sibling Erin Bates and her husband, Chad Paine, are currently expecting their fourth child, who is due in December, according to the Knoxville News Sentinel. Erin revealed in an Instagram post in July that they are expecting a girl and already have a name picked out — Holland Grace Paine. What a pretty name!

Erin and Whitney are clearly very excited to be pregnant together and due around the same time. This can be seen in a super cute Instagram photo of the two of them holding their bumps and smiling. They're glowing and their happiness shows.

But this upcoming year, there will be a Bates sibling who will become a mother for the first time. Carlin Bates is expecting her first child with her husband, Evan Stewart, and are overflowing with excitement about it. The couple is expecting a girl in the new year (making that three girl grand babies on the way) and plan on naming her Layla Rae, according to a post on Carlin's Instagram.

Carlin told People that she is so excited to be pregnant at the same time as her older siblings. "I've learned something from each one of them," she said. "They've already answered so many questions that I've had. I know that we have bonded even more, now that we have motherhood in common. My sisters are my best friends."

This is such an exciting time in all of their lives, and the fact that they have each other to rely on during this time is even more special.