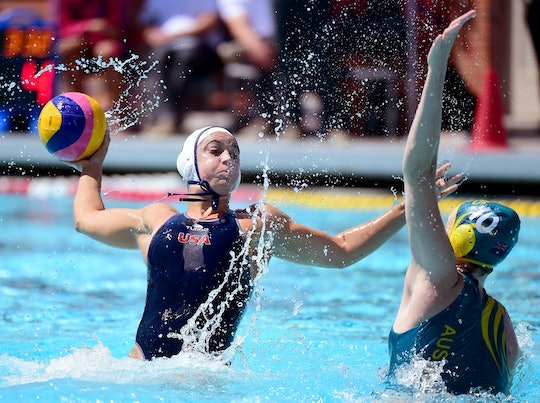 How Many Calories Do Olympic Athletes Burn A Day? Their Caloric Intake Gives A Few Clues

With the Olympics in Rio de Janeiro, Brazil quickly approaching, it's time to start obsessing over your favorite sports again. It's sort of amusing how throughout the year, I don't know the last thing about gymnastics, for example, but come the Olympics, I am an expert of all the sports things. My un-athletic self even starts to wonder how they keep up with training, what they eat, and how many calories Olympic athletes burn in a day. Spoiler alert for that last one: It's a lot more than anyone else.

Of course, it totally depends on what sport they're training for and competing in and it varies widely, but Olympic athletes are essentially machines, expending energy like their lives depend on it. They also need to consume more calories than the rest of us just sitting around all day — even if we do our daily cardio and gym routines. According to NPR, American swimmer Michael Phelps, for example, consumes around 12,000 calories a day while training. But he can quickly burn that off while swimming all day. Because all he does is swim.

It's hard to calculate exactly how many cals Olympic athletes are burning during training. Nanna Meyer, senior sport dietitian for the U.S. Olympic Committee, told NPR, "We don't have great data on many sports on energy expenditure because we can't measure it." But it's safe to assume it's at least what they're consuming. Here's what they consume according to Meyer.

Swimmers, cyclists, marathon runners, and rowing champs tend to consume 3,000-8,000 calories a day, and before an event, they carbo-load.

Basketball and soccer players consume 3,000-4,500 calories every day and while they definitely consume carbs before the game, they don't overload. How can you run like that, right?

Weight lifters and shot putters will consume anywhere from 2,800-6,000 calories a day. They do some moderate carb loading before the competition.

Gymnasts and synchronized swimmers eat about 2,000-2,500 calories. Before they head to the floor or the pool, they usually restrict eating altogether. Which can get a little hairy, when it comes to the rates of eating disorders in their fields.

Those who do taekwondo, wrestle, or fence have it the hardest. They usually try to eat less than 1,500 calories a day to make a weight class and then once they do, they eat accordingly to recover a bit. Yikes, right?

These guys eat about 2,500-3,500 calories a day and before getting in the water to compete try to "moderate" their energy intake.

It takes a lot to train at the Olympic level and their energy intake and outtake can mean the difference between the silver or a gold medal sometimes. If you'll excuse me, though, I'm going to pretend I'm a U.S. Women's soccer champ and go carbo load. That is something I could get into.