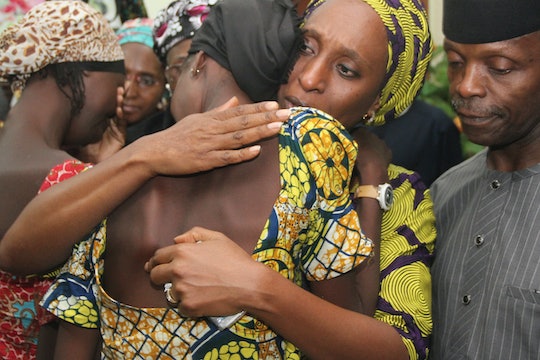 How Many Chibok Girls Are Still Being Held Captive By Boko Haram? 21 Were Just Released

Two and a half years ago, 276 female students were kidnapped from the Government Secondary School in Chibok, Nigeria. The Chibok girls were abducted by the millitant terrorist group Boko Haram based in northeastern Nigeria. According to the Global Terrorism Index created by the Institute for Economics and Peace, Boko Haram is an Islamic extremist group that has surpassed ISIS as the world’s deadliest terror group. The Geneva Summit reports that 57 of the school girls managed to escape over the first few months of their abduction. On Thursday morning, for the first time since April 14, 2014, the Nigerian government was able to negotiate the release of 21 more girls. This is certainly excellent news, however, 197 Chibok Girls are still being held captive by Boko Haram.

The news that Boko Haram surrendered 21 of its captives came as a great surprise to many people. It was reported just last month, according to the BBC, that the Nigerian government’s negotiations with the Islamist extremist group had been unsuccessful. The girls’ release had not only Nigerians, but everyone who has been outraged by this kidnapping, wondering what changed in the negotiations.

There are a number of different reports about how the Nigerian government secured the release of 21 Boko Haram prisoners. Two military officers told the Associated Press that the girls were exchanged for four high level Boko Haram commanders, however, The BBC reports that Vice President Yemi Osinbajo outright denied an “exchange of any kind.”

The AP also reports that the Swiss Government stepped in to assist the Nigerian government by paying Boko Haram a significant ransom for the kidnapped girls. It is being speculated that the ransom was somewhere in the millions. While it’s still unclear exactly how the Chibok girls’ release from captivity was secured, the Nigerian government reportedly remains dedicated to freeing the remaining 197 girls still missing. Vice President Osinbajo did deny that any prisoner exchange was made for the 21 returned girls, however, he did not rule out that path in the future. The government will apparently keep all available options on the table when working to secure the release of the remaining Chibok girls.

One hundred and ninety girls are still missing, but it is unclear how many of them remain alive. Some of the girls who have escaped from Boko Haram since their kidnapping over two years ago have spoken out about their experience. Some of the abducted girls did not survive their captivity and were killed in military bombardments, while others are apparently choosing to stay with Boko Haram. According to the Daily Trust, some of the girls were married to Boko Haram fighters and have had children with their captors.

It is a heartbreaking and complex situation for the girls, as well as their families. Muta Abana, a father of one of the 21 girls released on Thursday, spoke to the AP about what it was like to know his daughter would finally be coming home. While he was eager to see his child, he also touched on the reality of the situation in Nigeria. “Some of them came back with babies, but think about it, are we going to kill the children? We won’t be able to kill the children because it would be as if we don’t want the girls to come back. God knows why it happened. It’s God’s will.”

The 21 Chibok girls were taken to Nigeria’s capital city of Abuja where they are receiving medical attention and trauma counseling. Hopefully they are able to find peace as they begin to pick up the threads of their old lives, two and a half years after their abduction.