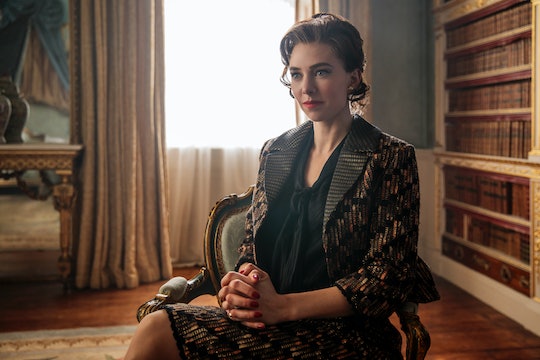 Princess Margaret Went On To Tackle A New Title: Motherhood

In Season 2 of The Crown, Princess Margaret will meet the man she is going to marry: a photographer named Antony "Tony" Armstrong-Jones. After some time spent sneaking around to see each other, they eventually decide to make it official and start a family. But how many children did Princess Margaret have? In real life, she welcomed two kids, Lady Sarah and David, the second Earl of Snowdon.

Though Margaret and Armstrong-Jones had been traveling in the same circles for some time, they didn't really hit it off until he was hired to take her portrait. According to an excerpt of the biography Snowdon by Anne de Courcy that was featured in Vanity Fair, the picture was for another of Margaret's admirers, but she ended up falling for the photographer instead. Margaret and Armstrong-Jones married on May 6, 1960, and it wasn't long before their kids were born.

But first Armstrong-Jones had to receive a title. On the chance their children ever came close to the throne, it would be a necessity, so he was named the Earl of Snowdon and Viscount Linley. His and Margaret's son David Albert Charles was born exactly one month later on Nov. 3, 1961. Sarah Frances Elizabeth followed on May 1, 1964.

David inherited his father's titles upon his death in January of this year, though professionally he goes by either Viscount Linley or simply David Linley. Both he and his sister took after their father when it came to artistic pursuits: David became a craftsman and Sarah a professional painter. David has his own bespoke furniture company called LINLEY and has also been the chairman of the auction house Christie's U.K. since 2006.

David credited his father for his interest in the arts, telling The Telegraph:

I inherited my love of design from my father, the Earl of Snowdon, who was always fascinated by pushing the boundaries of an object — working out how to make it touch the ground in two places rather than three. I was pretty bad at making things as a child but he was an excellent teacher. We used to make models together at weekends — or rather, I held bits of wood while he cut them.

As a teenager, David's love of design grew and blossomed into the career he has today. He went on to marry the Honorable Serena Stanhope, daughter of the Earl of Harrington, and have two children of his own: Charles and Margarita. Margarita was even one of Kate Middleton's bridesmaids at her wedding to Prince William.

It seems that Sarah stays mostly out of the spotlight, though her paintings and drawings have been exhibited at the Redfern Gallery. In the 1980s, she took on a position as a wardrobe assistant on the film Heat and Dust; that was where she met her husband Daniel Chatto, who was an actor at the time. They married in 1994 and had two sons, Samuel and Arthur. They remain happily married to this day.

While Sarah might not find herself in the public eye very often, she's said to be particularly close to her aunt, Queen Elizabeth. The Daily Mail claims that Sarah is the only person allowed to accompany the Queen to one of her favorite vacation spots: Craigowan Lodge in Aberdeenshire, near Balmoral Castle. Though rumored tidbits like that should always be taken with a grain of salt, Sarah's fond words about the Queen in the documentary Elizabeth at 90: A Family Tribute proved they definitely are on great terms.

Princess Margaret and her husband divorced in 1978 after two years of separation; she did not marry again or have more children, but Armstrong-Jones did. He had a daughter with his second wife, and may have also had two more kids in other relationships. His daughter Lady Frances was a bridesmaid at her half-sister Sarah's wedding.

David and Sarah may not be as widely-known as other members of the royal family, but it seems like Margaret's two children are doing very well.