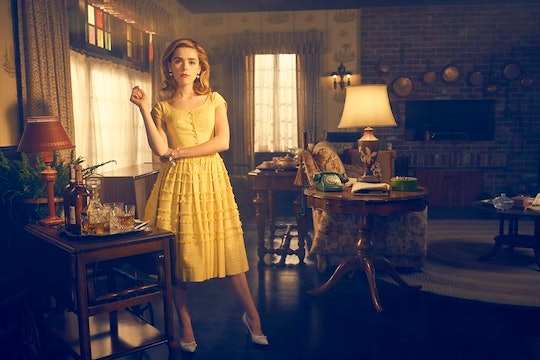 FX's Feud primarily explores the professional lives of its two leading ladies, Bette Davis and Joan Crawford, by following the disappointments and triumphs of their late-in-life careers. However, that doesn't mean their personal lives are left out of the show entirely; when personal and professional intersect, Feud handles both. Davis' daughter B.D. Hyman (née Sherry) had a small roll in the film that dominates the show, so Davis' relationship with her became a part of the show as well. But was B.D. her only child? How many children did Bette Davis have?

Davis was the mother of three. She conceived B.D., whose full name was Barbara Davis, with her third husband William Grant Sherry. She then adopted two children with her fourth husband Gary Merrill, a son and a daughter named Michael and Margot. Neither of her younger children pursued careers in Hollywood, and after a few small parts, B.D. also chose not to act. These days she's an evangelical preacher who spends her days spreading the word of Jesus, whereas Michael works as a real estate lawyer in Boston. It is unclear whether Margot is still alive. She was found to be developmentally delayed when she was very young and was institutionalized, which was where she spent most of her life.

Davis discussed her children in an interview with Charlotte Chandler for Chandler's Crawford biography, Not the Girl Next Door. Despite their animosity, there were similarities in Davis and Crawford's lives; both had adopted children, and Crawford's relationship with her two oldest kids was incredibly fraught. When asked about Crawford and her children, Davis was distinctly retrograde in her opinions about adoption, though she had no remorse about choosing to adopt.

"Of course, dear B.D., of whom I'm so proud, is my natural child, and there always are certain risks in adopting," Davis said. "Gary and I adopted two babies, because when we married I was too old to have our own. We were very pleased with our little boy, Michael, but our adopted daughter, who was a beautiful baby, was brain-damaged. I never have had regrets, though, because I think we provided for her better than anything else that could have happened to her, and we gave her some happiness in her life. You can't return a baby like you can a carton of cracked eggs."

Davis later went on to become estranged from her "dear B.D." after B.D. wrote a memoir that depicted Davis in a less than positive light, exposing her mother's supposed alcoholism as well as the abuse Davis both suffered and dished out. As you can imagine, it put a major strain on their relationship, though, it's unclear how much of their story will be featured throughout the series. We won't have to wait long to find out.