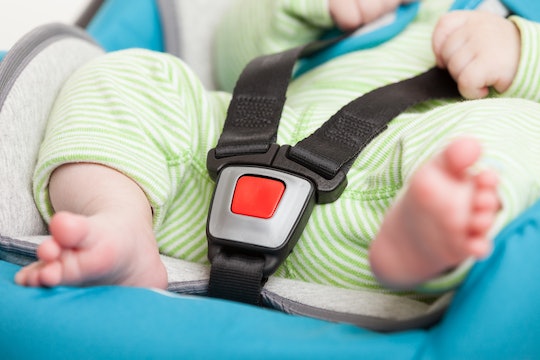 There are numerous guidelines for parents to follow regarding safe sleep practices for their babies in their cribs. However, there's one place that isn't exactly safe for babies to sleep, but that many parents and caregivers often don't think twice about: their car seats. Experts have long advised that car seats aren't a safe place for babies to snooze, and can even be a fatal risk. The number of deaths due to kids sleeping in their car seat is something to take not of, because infant deaths in car seats can happen quickly, with little to no signs that anything is wrong.

Although the topic of car seat sleeping deaths, fortunately, doesn't dominate headlines, it does tragically happen. As the Journal of Pediatrics reported in 2015, "Sleep-related deaths are the most common cause of death for infants 1-12 months of age," but a fairly high percentage of those deaths are due to babies sleeping in their car seats for too long.

According to the most recent available data available on the subject published by Journal of Pediatrics — entitled "Cribs Are for Sleeping, Car Seats Are for Traveling: Danger in Using Sitting and Carrying Devices for Sleeping Infants" — researchers looked at a total of 47 infant deaths between April 2004 and December 2008 due to babies sleeping in their car seats.

The researchers of this study discovered that, "two-thirds of the cases involved car seats." Strangulation from straps accounted for 52 percent of deaths linked to sleeping in car seats, according to the 2015 study. In most cases, death occurred due to the baby's head sulking down to its chest, and the baby not being strong enough to support it, and eventually suffocating.

While some might think that the number of deaths included in this report is relatively small, it's still a number that simply shouldn't exist. And for two Oklahoma parents, their perfectly adequate car seat proved to be deadly for their 11-week-old son, who reportedly died after he was left alone, asleep in his car seat for two hours.

Speaking to Us Weekly in January of this year, the boy's mother, Ali Dodd explained how Shepard's death was totally and completely preventable. "While the infant was sleeping, Dodd says his head fell down into a chin-to-chest position, and without the muscle strength to lift his neck, he suffocated," the magazine explained. "Shepard’s official cause of death was positional asphyxiation."

Shepard's tragic death helped Dodd and her husband, Derek, work to prevent the same thing from happening to another baby. The couple has since advocated for change, even creating a new law in the state of Oklahoma, called Shepard's Bill. "It’s a bill which educates daycare providers about safe sleep practices,” Dodd told Us Weekly. “And we have four more bills heading to the committee.”

Dodd's advocacy work is certainly important, as the Journal of Pediatrics' study found that many of the deaths due to sleeping too long in car seats happened relatively quickly. "The elapsed time from when the infants were last seen alive to when they were discovered ranged from as little as four minutes to up to 11 hours," the study noted.

As such, adhering to specific safe sleep guidelines is especially important because a situation could turn from safe to deadly in a matter of minutes.

Although parents have a million and one things on their mind each day, remembering safe sleep practices is a must. However, if your baby does fall asleep in his or her car seat while in the car, don't panic immediately. The "jiggly movements" from driving "seems to keep babies stimulated enough to promote breathing," Happiest Baby notes. However, according to the American Academy of Pediatric, parents should move their child out of their car seat, to a flat and firm service, as soon as you get to your destination and out of the car.

Cribs are for sleeping and car seats are for traveling, as the study advises — and the number of reported deaths thus far is proof that this advice should be followed to a T. It may not always be convenient, but it is crucial.