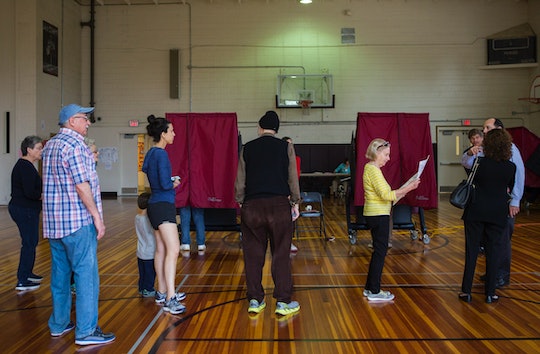 How Many Delegates Are At Stake In Indiana? The Nominees Are Becoming More Clear

With Indiana set to vote in Tuesday's presidential primary, America is wondering if this is it. How many delegates are at stake in Indiana? Is this the primary that will finally clinch the race? Not quite... But we're almost there. There are 57 Republican delegates up for grabs in Indiana, and 83 Democratic delegates. Even with total sweeps, that's not enough for any candidate to secure a nomination, but it underscores just how likely it is that we'll end up choosing between former Secretary of State Hillary Clinton and former mail-order steak spokesmodel and current Twitter agitator Donald Trump. Apologies to anyone who's in favor of free college tuition or unnecessary, patronizing, and transphobic bathroom laws, but Vermont Sen. Bernie Sanders and Texas Sen. Ted Cruz are effectively eliminated. As for Ohio Gov. John "Wait, I swear I'm on the list!" Kasich, let's not waste any more time on him.

Trump, disturbingly, already has 996 delegates; 81 percent of the 1,237 he needs for the nomination, according to NPR. While a sweep of Indiana would only get him to 85 percent, it's mathematically impossible for his Republican opponents to reach 1,237 at this point. Of the nine remaining contests, Trump would only need to nab 36 percent of the delegates, well within his reach. I'm so sorry, everyone, but this is happening. Mark June 7 on your calendars as the day that Trump will officially secure his 1,237. We'll speak of that day in hushed tones when our children's children ask us what life was like "in the before times."

On the other side of the aisle, Clinton currently has 2,165 delegates, or "well, actually, only 1,645," as Bernie bros who don't count superdelegates are wont to remind us. Sanders holds 1,357 total, or 1,318 if we're only counting pledged delegates. Any way you slice it, things aren't looking good for Sanders. Let's pretend that all the superdelegates are still undecided for a moment. That still puts Clinton at a 327-delegate lead. Those looking to draw comparisons between the Clinton-Sanders race and the Clinton-Obama race would do well to remember that the biggest pledged-delegate lead Obama ever had on Clinton was only 114, and in the end, his lead was only 69 delegates. Clinton could clinch the nomination as early as May 17, though it's more likely that June 7 will be her lucky day.

So, with the races just about won at this point, do Indiana's delegates even matter? Not so much. Even if Cruz won them all, it's still literally impossible for him to gain enough for a nomination; he currently only holds 565 delegates, and there just aren't enough left for him to reach 1,237. Sanders would need 65 percent of the pledged delegates (82 percent of the total delegates), which isn't technically impossible, but let's be honest, unless Clinton claims responsibility for Prince's death, it doesn't look likely that she'll lose.