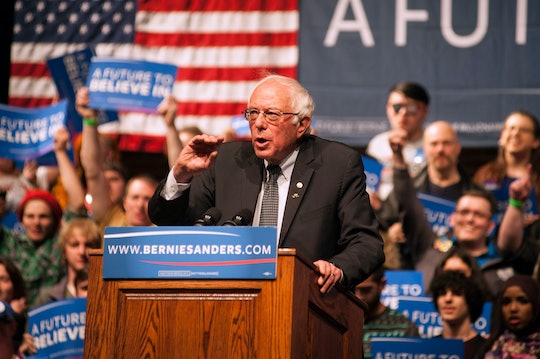 How Many Delegates Did Bernie Sanders Win In Wisconsin? Not Enough To Make A Major Difference

Vermont Sen. Bernie Sanders beat out former Secretary of State Hillary Clinton in the Wisconsin primary Tuesday, and much to the chagrin of Clinton’s camp, it wasn’t even particularly close: Sanders won 56 percent of the vote. That’s definitely cause for celebration for Sanders, who is still fighting hard to close in on Clinton’s lead. But unfortunately for the Sanders campaign, the reality is that what really matters now is not the number of wins, but the number of delegates earned from each win — and that means that his big Wisconsin win might not have been that big at all. How many delegates did Bernie Sanders win in Wisconsin? According to the Associated Press, Sanders' win earned him 45 out of 86 delegates. That definitely helps keep him in the race, but certainly isn’t a game changer. Clinton, after all, currently leads in the total number of delegates (she has 1,728 to Sanders’ 1,058), which basically means that Sanders would need to win a significant majority of the remaining delegates (67 percent, according to the Associated Press) in order to secure the Democratic nomination. Talk about a tall order.

Tempering Sanders’ Wisconsin win even more is that it wasn’t exactly surprising: the electorate was overwhelmingly white and liberal, which is generally the demographic Sanders performs best with. In fact, Clinton wasn’t even in Wisconsin Tuesday night — she was at a campaign fundraiser in New York instead.

But Sanders’ win is still significant in one major way: momentum. According to Vox, the impression that a candidate is on an upswing thanks to a win actually does affect voter opinion, and is likely to earn him support, regardless of the actual numbers. Political scientist Adam Seth Levine told Vox,

We do have evidence that there is such a thing as momentum. Altering perceptions of electability among voters can be really persuasive.

And that added support could end up counting in a major way going into primaries in states with higher delegate counts like New York and Pennsylvania — where a win would actually have a much more significant effect on Sanders’ chances at nabbing the nomination.

The difficulty for Sanders when it comes to these delegate-rich states? They’re places where Clinton is already expected to have a strong showing. Both New York and Pennsylvania are much larger and more diverse than Wisconsin (where 88 percent of the population is white), and Clinton generally performs better than Sanders among non-white voters — though Sanders’ campaign manager Jeff Weaver did point out to the New York Times that Sanders’ wins in Hawaii and Michigan suggest that’s not always the case.

It’s also worth noting, though, that Wisconsin hasn’t been Sanders’ only big win as of late: according to the New York Times, he also earned recent wins in Washington, Alaska, Idaho, Utah (as well as the previously-mentioned Hawaii). What that suggests more than anything is that, while Sanders certainly has his work cut out for him if he wants to win the nomination, he is definitely still relevant, and could still potentially upset Clinton overall, even if the chances of that happening are slight.

Unsurprisingly, Sanders himself touched on that hopeful possibility in a speech to Wisconsin supporters Monday, saying, according to Vox,

If we win here, we are going to have a bounce going into New York state where I think we can win. We win in New York State, we are on our way to the White House.

The bottom line? The Democratic nomination is still technically anybody’s game — at least until New York. The New York primary on April 19 is likely to be make or break for Sanders.