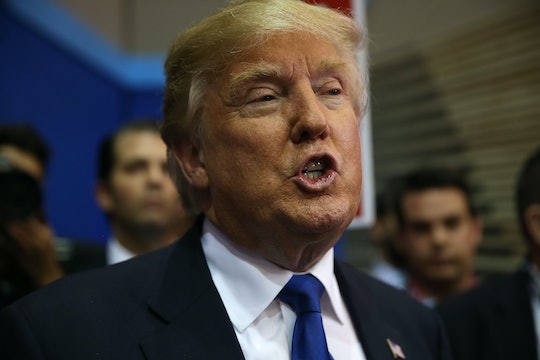 How Many Delegates Does Donald Trump Have So Far? He Could Seriously Be The Nominee

This is why we can't have nice things, America. Republicans wished upon a star for a candidate who wasn't a "Washington insider," a guy who would really "tell it like it is," and look what the cat dragged in, ate, and subsequently coughed up: Donald J. Trump, a businessman who wants to ban seemingly any and all immigrants who aren't Eastern European supermodels interested in marrying him. Trump's presidential campaign seemed like a joke when it began, but now it's all too serious. How many delegates does Trump have so far? He currently has more delegates than all the other Republican hopefuls combined. Going into Super Tuesday, Trump has secured 82 delegates, leaving Texas Sen. Ted Cruz with 17, Florida Sen. Marco Rubio with 16, Ohio Gov. John Kasich with 6, and retired neurosurgeon Ben Carson with 4.

Quick question, what the hell are Kasich and Carson thinking? Do they really hate their party that much? They've already wasted 10 delegates that could conceivably go to a candidate who could eventually overtake Trump, a former reality show host who was fired by NBC for implying that all Mexicans are criminals. Honestly, before looking it up, I'd assumed that Carson must have dropped out by now, because I forgot that being a former neurosurgeon doesn't guarantee that someone is actually smart. And Kasich– who is that guy? I literally forget that he exists every single time his name comes up.

But even if Kasich, Carson, and Cruz dropped out, leaving Rubio to battle the big bad beauty pageant mogul, things are still looking pretty grim. Trump has about two-thirds of the Republican delegates awarded so far, and it'll only get worse: a number of Republican primaries are winner-take-all, which means that the candidate with the most votes doesn't just get the most delegates, they get all of them. Winning in these states (which, if the polls are a good indicator, he will) would land Trump an additional 400 delegates.

That's still far off from the 1,237 delegates needed to secure the Republican Party's nomination, and that won't happen until July, so there's still time for someone (anyone? please?) to overthrow Trump's hold on the Republican party, but it's looking more and more unlikely. Some Democrats see this as a good thing, thinking that there's no way Americans will vote Trump into the White House, thereby ensuring a Democratic presidency. Others, like myself, are quietly packing their bags and inching ever-so-slowly towards Canada, just in case.