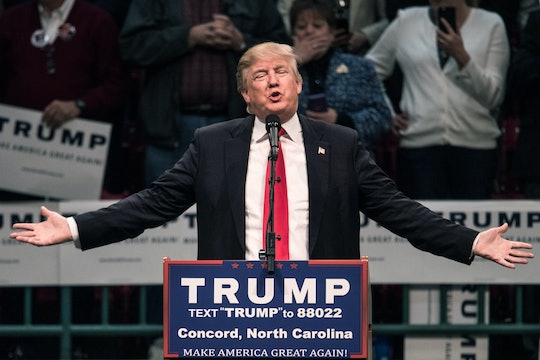 How Many Delegates Does Trump Need to Win the Nomination? He's Getting Too Close

Whether you think he's a shrewd businessman or a lewd opportunist, Donald Trump is on track to lock up the GOP presidential nomination in the coming days and weeks ahead. The field of Republican candidates, which was once 17 strong, has winnowed to a four-man race between Trump, Texas Sen. Ted Cruz, Florida Sen. Marco Rubio, and Ohio Gov. John Kasich. But calling it a "race" is being generous. Trump is doing so well, his opponents are betting it's going to take all three of the other candidates to keep Trump from getting the nomination, but even that's a long shot. So how many delegates does Donald Trump need to win the nomination? Not as many as the #NeverTrump movement would like.

Trump isn't just leading in the delegate count at 384, but he's also ahead or very competitive in polls in upcoming primary states, including delegate-count heavy states voting Tuesday, like Michigan (59 delegates), Mississippi (40 delegates) and Idaho (32 delegates). Michigan's delegates are awarded proportionally, Mississippi is both a winner-take-all and a proportional state, and Idaho is winner-take-all if someone gets 50 percent or more of the vote (though that's unlikely, so it will likely be proportional).

Trump needs 1,237 delegates to win the Republican nomination for president. For Republicans who are uncomfortable with Trump's racist, fascist, and ill-informed candidacy, they need all three of Trump's competitors to stay in the race to try, between all three of them, to win enough delegates to keep Trump from getting to the magic 1,237 number.

That's exactly the tactic Massachusetts Gov. Mitt Romney advocated in a speech last week slamming Trump. He wants GOP primary voters to back the candidate who has the best shot at winning in their states, meaning they should vote for Kaisich in his home state of Ohio, Rubio in his home state of Florida, etc. If no candidate wins 1,237 delegates heading into the Republican National Convention in Cleveland, Ohio, on July 18, the party can ignore all the votes cast during the primary and vote right there in the Quicken Loans Arena for who they want to be the nominee. If no candidate gets to 1,237, the convention becomes what's called a "brokered" convention. And since, by definition, the convention will be filled with the party's leaders and "establishment," there's little chance they would pick Trump and could instead pick someone who hadn't even participated in the primaries ... someone who was ready to step into the role at a moment's notice ... someone like, I don't know, just spitballin' here but ... how about Mitt Romney!

And that's the most shocking part of this entire debacle. Essentially, Romney is asking voters to intentionally blow up the entire nominating process and instead let a bunch of delegates in ridiculous hats hand-pick the nominee, against the wishes of the majority of voters.

Listen, I loathe just about everything Trump stands for, but there's something even more offensive about Romney asking members of his own party to hand over their vote to some party elite who "knows better." If the majority of Republican voters want a disgusting, rage-filled misogynist to represent them in the race for president, they should have that right. This is Democracy. Or, at least, it's supposed to be.

So, instead of finding and supporting a qualified candidate to compete for the most powerful job in the world, the Republican party is just trying to keep Trump from winning enough delegates to secure the presidential nomination — 1,237. This isn't the last time you'll hear that number over this election season. It's so important that the Democratic system might hinge on whether Trump can hit it or not.