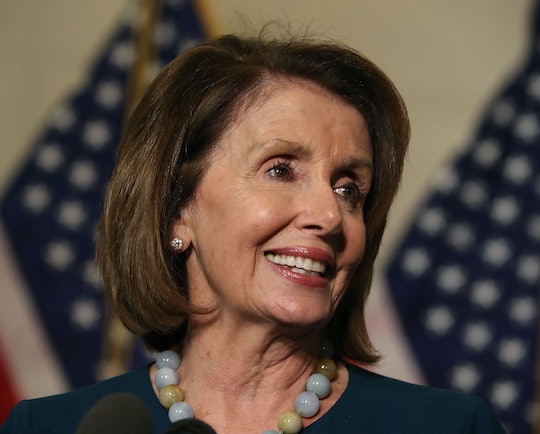 How Many Democrats Voted Against Nancy Pelosi? She Kept Her House Leadership Position

On Wednesday, House Minority Leader Nancy Pelosi was re-elected into the role she's now held for 13 years, defeating Ohio Congressman Tim Ryan's bid for minority leader. With many Democrats publicly calling for change within the party since Democratic candidate Hillary Clinton's defeat, many are wondering how Pelosi managed to retain her long-held role. However, when you look at the number of Democrats who actually voted against Pelosi, it seems that only about a third of Democrats wanted a change in House leadership.

Only 63 Democrats voted against Pelosi, while 134 voted her back in. However, the number of votes against Pelosi did increase since the last House vote in which she ran opposed (in 2010, only 43 Democrats voted against her). This year, Ryan ran against her with a message of change within the party. "What we are doing right now is not working," he wrote his colleagues in mid-November, according to The Washington Post. "At this time of fear and disillusionment, we owe it to our constituencies to listen and bring a new voice into leadership."

Ryan said the Democrats' loss in November's election indicated voters' disenchantment with the party. In November, he told Slate that Democratic leadership's recent focus on Zika and Centers for Disease Control and Protection funding simply didn't resonate with voters.

"I’ll just tell you, if you’re a working-class person drinking a beer on Steel Street in Youngstown, you’re not worried about the Zika virus," he told Slate in November. "Guys are worrying about getting food on the table for their families. ... We’re not talking about the kind of things that are on people’s minds. And that’s a major, major problem in politics."

In response to criticism, Pelosi proposed changes to the House caucus before the vote which would allow for more elected positions and would put limits on leadership positions. The changes would bring younger Democrats into leadership positions and keep other members from remaining in the same role for too many terms. Pelosi also assured Democrats that the party would renew its focus on economic issues in Congress.

For Ryan and his supporters, the changes were a sign that his run for House minority leader wasn't a wasted effort. "We now have a leadership that is listening to what we say," Ohio Rep. Marcia Fudge told The Atlantic. "He didn’t lose today. Today, we made a caucus more responsive to its members."

Pelosi, for her part, was optimistic about the Democratic Party's future. "We know how to win elections. We’ve done it in the past, and we will do it again," she said. With new caucus changes and a party that's realized its need for change, it'll be interesting to see what's next for Democrats under Pelosi's continued leadership.