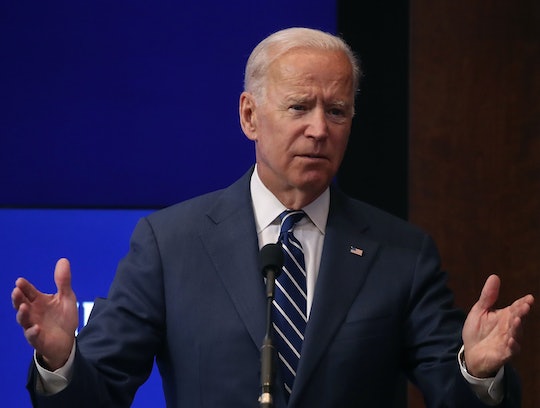 Unsurprisingly, the topic of immigration came up during night two of the Democratic debate Wednesday, with Vice President Joe Biden and New Jersey Sen. Corey Booker getting into a tense conversation about deportations. Booker pressed Biden on the number of deportations that happened under President Barack Obama, a question the former VP skirted around.

Although many of the Democratic presidential candidates have similar views when it comes to immigration, debates aren't for everyone shaking their head in agreement and then moving on. Which means the candidates had to distinguish themselves from the competition — often by calling to attention their opponents' past actions. And that's exactly what New York Mayor Bill de Blasio did when he asked Biden what he had done to stop deportations when he served as vice president under President Barack Obama.

"I asked the vice president if he used his power to stop those deportations," de Blasio asked, according to CNN. "If you want to be president of the United States, you need to be able to answer the tough questions. I guarantee you, if you're debating Donald Trump, he's not going to let you off the hook. Did you say those deportations were a good idea or did you go to the President and say, 'This is a mistake, we shouldn't do it.' Which one?"

Biden didn't answer the question directly, but instead explained, "I was vice president. I am not the president."

That's when Sen. Booker took a dig at the former vice president. "You invoke President Obama more than anybody in this campaign," Booker said, according to The Hill. "You can't do it when it's convenient and then dodge it when it's not."

Circling back to the question at hand though, let's take a look at how many immigrants were actually deported under Obama. During a question directed at Biden, moderator Don Lemon mentioned that 800,000 immigrants were deported during Obama's first two years, as Slate reported. (He also noted this was "far more" than were deported during President Trump's first two years.) Lemon asked the former VP, "Would the higher deportation numbers resume if you were president?"

However, some argue that only looking at the numbers doesn't provide the whole story. "A straight numbers-by-numbers comparison doesn't provide an accurate picture of what was going on in the administration," Cecilia Muñoz, one of Obama's top domestic policy advisers, told CNN. She explained that unlike Trump, Obama focused on deporting immigrants who were convicted of serious crimes as well as those who had recently arrived with no criminal records.

Regardless of the deportations that happened during Obama's presidency, Biden has made this clear: He has no intention of resuming these numbers if he were to win the 2020 election. And although Biden managed to side-step his fellow candidates' questions on the topic this time, the former vice president should probably brush up on a better answer for next time. Because it will undoubtedly come up again.