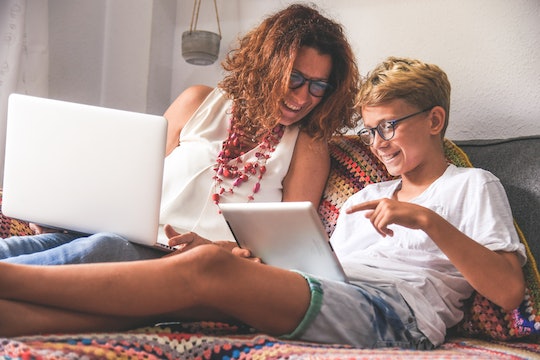 Good News: You & Your Kids Can Use Your Disney+ Account At The Same Time

Since its launch in November, it's become increasingly clear that Disney+ isn't just a subscription-based streaming service for kids. With content from National Geographic, Marvel, and Star Wars as well as a massive library of new and old Disney classics, there really does seem to be something for everyone in the family to enjoy. But just how many devices can use Disney+? Or in other words, can the whole family use one account?

According to the Disney+ help center, playback of the streaming network is supported on a variety of devices, including mobile devices, desktop browsers, smart TVs, game consoles, and even set-top boxes. Specifically, you can use Disney+ on both Android and Apple phones, the Xbox One, Sony PlayStation 4, Apple TV, Android TVs, LG WebOS Smart TVs, Samsung's Tizen Smart TVs, Roku TV (or through the Roku app), via Amazon FireTV, Apple AirPlay, Chromecast, Chromebook, and of course any computer that meets the required browser requirements.

What's more, Disney+ reportedly hasn't set a limit as to how many devices can be connected to one account. "There is no limit on the number of devices that can be associated with your account," Disney+ spokesperson Jessica Casano told Jared Newman of Tech Hive. So feel free to connect your all your TVs, laptops, tablets, mobile phones, and desktop computers so you can enjoy the massive library of shows and movies available on Disney+ quite literally wherever you are.

Although there doesn't appear to be a restriction on the number of devices you can use Disney+ on, there are limits as to how many of those devices can stream at once. Disney+ allows up to four devices to be streaming content at the same time. That means you and your partner can both separately watch The Mandalorian on your smart phones during your commute to work, while your youngest uses the TV at home to watch Frozen for the hundredth time and your oldest streams Marvel's Thor on a tablet in their room.