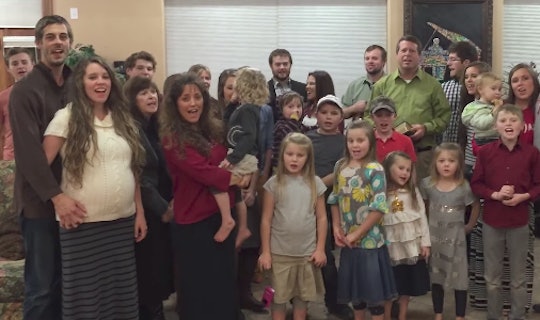 The Duggar family is famous for its appearances on the TLC shows 19 Kids and Counting and Counting On, and for the huge number of kids in their family. Jim Bob and Michelle Duggar have 19 children, and a good number of the Duggar kids still live at home. They recently got most of the family together under one roof for Thanksgiving, but at least one married couple out of the whole brood was missing from the event, which raised some eyebrows among fans.

The Duggar home in Arkansas hosted "the majority" of Jim Bob and Michelle's 19 children and numerous grandchildren for Thanksgiving this year, according to People. But fans of the religious family were "quick to notice" that one daughter, Joy-Anna, and her husband Austin Forsyth were missing from the event, according to The Christian Post.

But apparently, the other Duggar kids who have married and gone on to start their own families were able to make it into town for the holiday. The eldest son, Josh, and his wife Anna were there, along with their five kids, according to People. Daughter Jill Dillard and her husband, Derick Dillard, were there with their kids, as were daughters Jessa and Jinger with their husbands, Ben Seewald and Jeremy Vuolo, respectively.

Jessa and Ben's kids were there too, as were son Joseph Duggar and daughter-in-law Kendra Caldwell, according to a photo shared by the Duggar family Instagram account.

That all might make it sound like a lot of the Duggars have left their parents' home and just came back from the holiday, but remember, there are 19 kids in this family. In reality, a fairly limited number of them are married. But a lot of the children are still pretty young, and likely won't be leaving the house anytime soon.

In Touch Weekly provided a handy visual guide to the Duggar family tree back in July, and it does a good job of laying out who's married and out of the house, and who isn't. The Duggar daughters, at least, don’t leave home until they're married, and it doesn't sound the adult sons who aren't married have left either.

Here are the Duggar kids who do not live at home:

As aforementioned, Josh Duggar is married to his wife, Anna, and they have five kids — Mackynzie, Michael, Marcus, Meredith, and Mason. Daughter Jill got married to Derick Dillard in June 2014, according to People. They have two kids together, and have lived in their own homes in Arkansas and in Central America for mission work, according to Entertainment Tonight.

Daughter Jessa is married to her husband, Ben Seewald, and they live outside the main Duggar home. They have two children, Spurgeon and Henry, according to Today. Jinger married Jeremy Vuolo in 2016, and they live far away from the rest of the family in Laredo, Texas, according to People.

Finally, Joy-Anna, as aforementioned, is also married and doesn't live at home. Neither does her brother Joseph, who recently married his wife, Kendra.

But that actually leaves a lot of Duggar kids still living under their parents' roof. Here's who still lives at home, as far as fans know:

Jana, the oldest daughter, is not married and lives at home, which leads to constant fan and media scrutiny. Her twin, John-David, is still single too, according to the International Business Times. He likely still lives at home, but fans don't know that for sure.

Josiah Duggar is 21, and still seems to live at home as well. He was in a "courtship" — which the Duggars and others with similar conservative beliefs consider "dating with a purpose" — in 2015, but it did not lead to marriage.

Twins Jedidiah and Jeremiah are both 18 years old, and appear to still be living at home. They're the last of the Duggar kids to technically be considered adults, so it should really come as no surprise that the rest of the Duggar kids are still living with their parents, too.

The rest of the Duggar daughters still at home include Johannah, Jennifer, Jordyn-Grace, and Josie — the youngest at just 7 years old. As for the youngest Duggar boys, Jason, James, Justin, and Jackson are all arguably too young to have left the house just yet. The youngest, Jackson, is 13, which is way too young to be in any sort of courtship, let alone to leave home and get married any time soon.

So 13 of the 19 kids in the Duggar family are still at home, unless fans don't know something that the family does. It could be that John-David is shacking up in a bachelor pad nearby, or that any number of the older boys are living it up in their own apartment away from Jim-Bob and Michelle. But it's likely that most of the Duggar kids live with their parents, and will until they get married — if they ever even say "I do."

More Like This
Aww! 2-Year-Old Archie Is "Very Happy" To Be A Big Brother
Meghan Markle Wore Lilibet On Her Chest As She Fed Chickens At Their California Home
Elon Musk Shares New Photos Of Son, X, With His Own Twitter Badge
'Harry & Meghan' Shares Never-Before-Seen Photos Of Archie & Lilibet