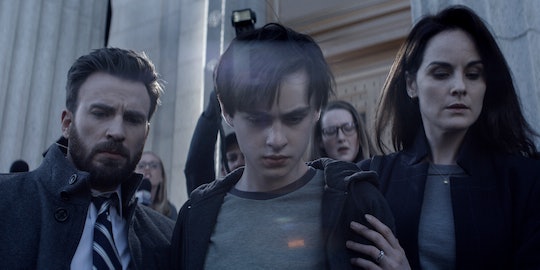 Defending Jacob may be among the most popular Apple TV+ series and it's not hard to see why the thrilling and emotional crime drama has been so successful in capturing viewers' attention. But as you get sucked into the series yourself, it's fair to wonder how many episodes are in Defending Jacob so you can plan your nights accordingly.

Based on William Landay's 2012 novel of the same name, Defending Jacob sees Marvel actor Chris Evans exchange his Captain America costume for a different sort of suit. Evans plays Andy Barber, an assistant district attorney who is tasked with prosecuting the murder of one of his son's classmates. But when Barber's 14-year-old son Jacob (played by Jaeden Martell) becomes a suspect, he's unsurprisingly thrown off the case. Barber and his wife Laurie (played by Downton Abbey alum Michelle Dockery) are then left to grapple with the idea that their son, who they're conditioned to protect at all costs, might actually be a murderer.

When reports first began to surface in 2018 that Apple TV+ had signed Evans to a straight-to-streaming project, it was billed as a limited series, meaning viewers should expect a short run. All told Defending Jacob is expected to run for only eight episodes. To date, six episodes of Defending Jacob have aired. Episode 7 will air on Friday, May 22 and Episode 8, the series' finale, will air on Friday, May 29.

In fact, creator and screenwriter Mark Bomback recently told Deadline that Defending Jacob was initially proposed to him as a film. "It was sent to me initially by Anonymous Content, with the idea it would be a film," Bomback told Deadline's Pete Hammond. "I started reading it and immediately I was, for better for worse, thinking this is gonna be a battle to make this as a film, this isn't the kind of film you really make anymore. Certainly in a way that would do it justice."

As Defending Jacob nears the end of its first season, it's still unclear if Apple TV+ has plans to renew the series for a second season or if the gritty crime drama will be considered wrapped after eight episodes.

You can stream the series now on Apple TV+ and new episodes air on Fridays.