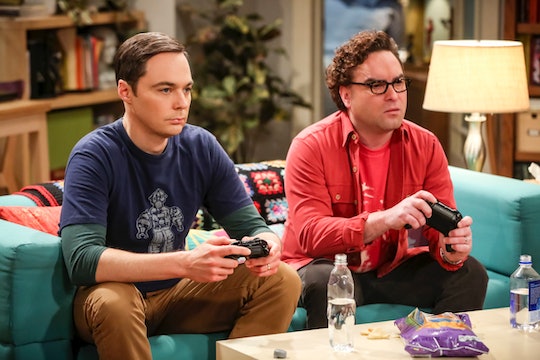 'The Big Bang Theory' Will Be Saying Goodbye This Season

The twelfth season of The Big Bang Theory will also be its last, bringing an end to its lengthy run on CBS. The show took a break for the holidays after "The VCR Illumination" on Dec. 6, but it's set to return on Jan. 3 to finish out the rest of its run. So how many episodes are left of The Big Bang Theory?

Express speculated that Season 12 will likely have 24 episodes in total, which is consistent with the previous eleven seasons. The show has produced 24 episodes a year every year, starting with Season 4; its second and third had a close 23 episodes, while its first was only 17. "The VCR Illumination" was the tenth episode of Season 12, which means there will be 14 more episodes to watch before The Big Bang Theory is gone for good. By the time it's over, 279 episodes will have aired — which means you could watch one a day and make it more than two-thirds of the way through a whole year. A chilling thought.

The Big Bang Theory will be the longest-running multi-camera comedy in TV history, according to The Hollywood Reporter. The publication also revealed that the series finale would air in May, though the exact date wasn't provided. That means fans have five months to figure out how to say goodbye to the show.

The series was created by Chuck Lorre and Bill Prady. In a joint statement shared by The Hollywood Reporter, WBTV and Chuck Lorre Productions discussed the end of the show, saying:

We are forever grateful to our fans for their support of The Big Bang Theory during the past twelve seasons. We, along with the cast, writers and crew, are extremely appreciative of the show's success and aim to deliver a final season, and series finale, that will bring The Big Bang Theory to an epic creative close.

Deadline reported that there was a possibility of the show continuing into Season 13, but star Jim Parsons wouldn't have stayed past the current season. Lorre didn't want to do the show without all three of the original leads (Parsons, Johnny Galecki, and Kaley Cuoco), so it seemed like it was time to call it quits.

While speaking to THR, showrunner Steve Holland talked about the final season. He didn't want it to "feel like one long farewell," but instead maintain the same tone of previous years. He didn't spoil their plans for the series' ending, but did say that there was a "big, open discussion" with Lorre and the other producers about how to find balance in a finale. They have to honor the characters while making sure they're not disappointing the fans (or indulging in too much fan service), which is a tricky line to walk.

Now the show will get a chance to tell any stories they didn't get to before, as well as bring back some of their favorite guest stars (Holland mentioned Laurie Metcalf and Christine Baranski specifically). The last 14 episodes should be enough time to bring closure to The Big Bang Theory. And if you miss the show too much, there's always Young Sheldon.