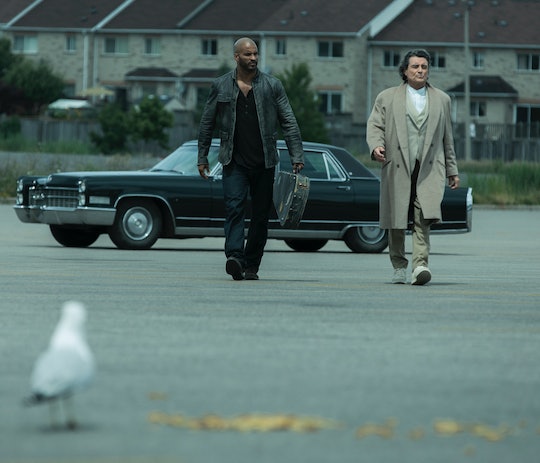 It's been two years in the making, but American Gods Season 2 is finally here. Considering how long it took to get made, many fans might be wondering: how many episodes is American Gods' Season 2? Well, there's good news and there is bad news — Season 2 is eight full episodes, which is the same amount as Season 1. The bad news is, well, there are only eight new episodes.

As fans may already know, there were a lot of behind the scenes changes made for American Gods. The original showrunners, Bryan Fuller and Michael Green, left the series in November 2017 due to budget and creative differences, according to a report by Variety. A year later, TVLine reported that actress Kristin Chenoweth confirmed she wouldn't be returning for the second season, either. Chenoweth told the outlet that she "couldn't come back" without her longtime friend, former showrunner Bryan Fuller, because it "wouldn't be right." Changes like these can make fans uneasy, but now that the show is back in full swing for Season 2, it's safe to assume they were thrilled to finally have new episodes to watch.

Despite several changes, the show's executive producer, Neil Gaiman, explained to TV Guide that fans had no reason to be concerned about the series.

"We had two showrunners who took us fantastically through Season 1. I would have loved it if they carried on with Season 2, but for their reasons they didn't. And we found Jesse [Alexander], who was in the unenviable task of having to take a show that already existed and having to get in and drive it," Gaiman told TV Guide at the Television Critics Association in February. "He did a fabulous job. He put together the show. He put together a writers' room. ... It looks and feels like American Gods."

Gaiman also explained that the two year wait for a season season had nothing to do with the changes that happened behind the scenes. According to Gaiman's interview with TV Guide, it was the network, Starz, who wanted to wait it out and see what the audience response would be. Once the network was pleased with how viewers were reacting, they green-lit a second season. By the sound of it, Gaiman and the rest of the American Gods team didn't want to just scramble and rush a Season 2 out to make viewers happy. Instead, they put in the time and work needed to make sure that Season 2 lived up to what fans experienced with Season 1.

Meanwhile, the show's star, Ricky Whittle, remains adamant that American Gods can hold its own, especially in Season 2. "I don't think it's going to replace anything," Whittle told Digital Spy while discussing the show. "I feel it's something completely fresh." He then went on to agree with his costar, Ian McShane, who told The Telegraph that Game of Thrones is "only t*ts and dragons."

You can watch Season 2 of American Gods on Starz — be sure to check your local listings.