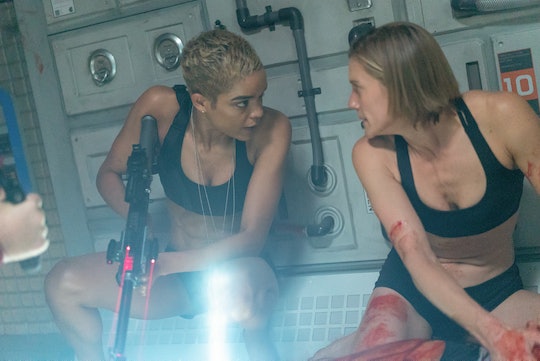 On Netflix's new series Another Life, a mysterious alien Artifact (with a capital A) lands on earth. This leads Commander Niko Breckinridge to lead a crew on a mission to an alien planet to investigate; meanwhile, everyone back at home has to figure out what this arrival means. If you're eager for a new spacey series to settle down with, you're already figuring out how to work this into your weekend plans. And knowing how many episodes Another Life is lets you know exactly how much time you'll have to budget to watch. But this is one marathon that won't take up your entire day.

Another Life dropped on Netflix on Jul. 25, so it's ready and waiting for you at this very moment. It has 10 episodes in total, of varying lengths; the introductory episode caps in at 61 minutes, while most subsequent episodes range between 37 and 47 minutes. Overall, it would take you around seven or eight hours to get through the entire series. That's nothing! In this era of marathoning, that's practically a snack. You might even be able to get through every episode in one sitting if you have the time, though of course you can divvy it up as you see fit, too.

But it might be hard to resist letting Netflix's autoplay feature carry you through from beginning to end. During an interview with Collider, star Katee Sackhoff commented on how intense Another Life is from start to finish. She revealed that she had actually been afraid that the show was "so fast-paced" that it wouldn't leave its audience with enough time to take a breath. That was an intentional choice, though it may make pressing pause an impossibility. "It's a race car that never lets up," Sackhoff promised.

In addition to following Sackhoff's Niko and her crew, Another Life explores the lives of the people who stay behind on Earth. Niko had to leave her husband Erik Wallace (Justin Chatwin) and daughter Jana (Lina Renna) to take on her mission. They have to worry about Niko from afar while Erik, a scientist, studies the mysterious Artifact that has settled on the surface of the planet. Meanwhile journalist Harper Glass (Selma Blair) is the first to see the Artifact when it arrives and also makes sure to keep her followers updated about every new development related to it.

Early reviews promise the show has a messy mix of space adventures and interpersonal conflict, which should make it an exciting watch. You may find yourself blazing through all ten episodes before you've even realized it. If the show ends up being your cup of tea, you may worry about the wait for more episodes. While it's a little too early to tell what Another Life's fate will be — considering it was just released, news of renewal would be too much to hope for at the moment — the people behind the scenes are prepared to continue the story. Sackhoff told Collider that they had plans for the "first three seasons," if the show was picked up for that many.

Another Life is only 10 episodes at the moment, but that could always change if Netflix decides to let the show continue. So don't worry too much about rushing through that marathon.