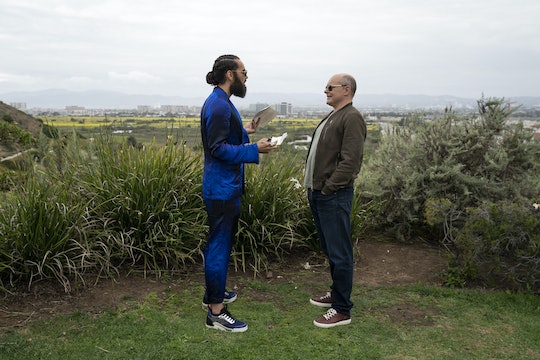 Dwayne Johnson is back as Spencer Stasmore, the retired NFL linebacker turned financial manager for NFL players on the hit HBO series, Ballers and fans are, in a word, pumped. But how many episodes is Season 5 of Ballers? At the moment it's hard to tell how much of the drama fans are going to get this year.

In its first three seasons, Ballers took place over 10 episodes, while Season 4 ended on the show's ninth episode. But the official HBO press release from September didn't specify the number of Ballers episodes ordered for Season 5, per Deadline. The show's IMDb page indicates there will be ten episodes, but because IMDb is not an official source, this should not be taken as gospel.

Season 5 picks up where things left off last October with Spencer and the NCAA going head-to-head over a lawsuit over Spencer's brother's suicide. Spencer gave a warm and fuzzy speech about his late brother in an interview about the suit, and it went viral on social media (as things do). That led to a private meeting with the NCAA that would allow him to get Quincy (Eli Goree) back — if he dropped the suit. The season ended with talks of Spencer resigning to protect Anderson Financial Management and Sports X. The Season 5 trailer shows all of that is still happening, and then some. But, as Spencer would say, "it's not how you start, it's how you finish."

As for how the others will fare on the show, it's a mixed bag. Other characters returning to the Ballers set include Joe (Rob Corddry), Ricky (John David Washington) Charles (Omar Miller), Vernon (Donovan W. Carter), and Reggie (London Brown). As for Lance, (Russel Brand), it's still a little unclear where he'll fit in after ending Season 4 on a pretty low note. But from the trailer, it seems he's not gone for good.

Johnson posted on Instagram in June giving thanks for the ride Ballers has been on, saying, "Thank you EMMY’s for your consideration and most of all, THANK YOU FANS for rockin’ with us and makin’ us @HBO’s highest rated 30 minute show all these years."

Unfortunately, however, for fans of the drama, it looks like Season 5 of Ballers will be the show's last. In a heartfelt Instagram post, Johnson confirmed the news. The actor wrote:

Cheers to our FINAL SEASON of @HBO’s BALLERS. My heart is full of gratitude to all of you for rockin’ with us every season. You made us HBO’s highest rated comedy for years and most importantly, you helped create and sustain a platform for other actors to have the OPPORTUNITY to work hard, grow and become household names. To me, the opportunity Ballers created for so many others, is the real gold of our show. I love you, I thank you and enjoy our final season of BALLERS.

While it's definitely unfortunate for fans of the show to see it leave HBO for good, it is a pretty good indication that the final season will be bigger than ever before. Hopefully everyone on the show ends up exactly where they deserve, but as Ballers proves, that's not always how this cutthroat industry rolls.