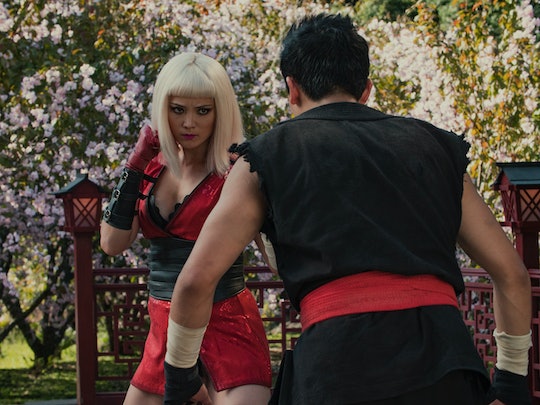 'Black Mirror' Season 5 Is Back To Inspire Your Dystopian Nightmares

Season 5 of Netflix's Emmy-winning sci-fi hit Black Mirror premieres June 5 — and the show appears to have a "less is more" philosophy when it comes to episode count per season. Season 4, for example, only had six episodes. That's a low number even in today's TV landscape that favors shorter seasons. So, I know you're wondering — how many episodes is Black Mirror Season 5? I am, too.

I hope you like your seasons of TV extremely short, because Black Mirror Season 5 is only three episodes. The show's creator Charlie Brooker explained why in an interview with Digital Spy, and part of the reason is Bandersnatch, the 2018 Black Mirror interactive film that lets viewers pick the outcomes they watch throughout the movie.

Bandersnatch was supposed to be an episode on Season 5 until it became clear to everyone that it was a strong enough project to stand on its own. "It just made more sense to do it as a standalone thing, so we decided to complete Bandersnatch and put that out first, then release the remaining three stories, because they're a good compliment to each other... and it's what we always used to do in ye olden days!" Brooker said, referring to the first couple of seasons of the show that are only three and four episodes respectively.

Brooker considered producing more episodes after Bandersnatch was complete, but that would've meant a longer wait for fans. "It was that [putting out three episodes] or make people wait longer," Brooker told Digital Spy. "We could've just made everyone wait, but we thought 'No... let's disappoint them sooner!'"

He's joking, of course. This seems like a win-win for fans. First, they got a critically-acclaimed film. Next, they get three carefully crafted episodes of television that go together thematically.

It gets even better, especially for Miley Cyrus fans, because she stars in a third of the season — the episode titled "Rachel, Jack and Ashley Too." She was a fan of the show before Season 5, but this episode also let her make an important statement about her profession. "I think it’s an important story that needs to be told, such a realistic take on what it’s like working in the music industry. It really portrays the overt exploitation of artists and that numbers usually eclipse the creative most of the time," she told The Guardian.

But it's not entirely science fiction. "It was a great collaboration, but there is a part of Ashley O that is not a character. I worked closely with Anne, the director and the show creators to share some of my personal experiences and help craft the episode," she continued. And it's not just about the past. Cyrus said that what happens to Ashley on the episode is still happening in the industry today.

But one of the most chilling aspects of the show is how futuristic yet relatable it is. While obviously I can't relate to being an international pop star, reuniting with an old college friend is a definite possibility — and that's the premise for the first episode of the season, "Striking Vipers." The show doesn't miss the chance to take me into my own worst nightmare on "Smithereens" the episode about a cab driver with a plan that suddenly spirals out of control.

If you need me, I'll be in the corner trying to decide if I'm brave enough to hit play.