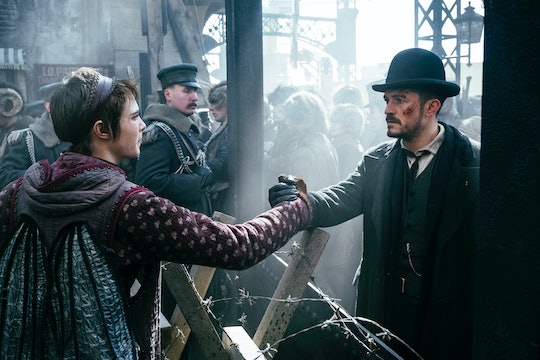 There’s a new fantasy drama on TV, and no, it’s nothing like Game of Thrones. Starring Orlando Bloom and Cara Delevingne, the Amazon series Carnival Row introduces viewers to a steampunk-style Victorian world filled with faeries, humans, romance, and war. If you’re planning on diving into the debut season, you might want to know exactly how many episodes Carnival Row is and when it will be available to watch.

Carnival Row's eight episode debut season is now streaming on Amazon Prime Video. Each episode is approximately an hour long, so it won’t take too long to devour the entire season. Luckily, when you’re done watching, you’ll actually have another season to look forward to. Ahead of the series premiere, Deadline reported that Amazon renewed the show for Season 2, and fans can expect to catch it sometime next year.

For those unfamiliar with the story, Carnival Row is set in a dystopian world where mythical creatures like faeries must learn to co-exist with humans when their homelands are invaded and destroyed by war. A human detective, Rycroft Philostrate (Bloom) and faerie Vignette Stonemoss (Delevingne) meet and fall in love, but during the war, they are torn apart for years.

When faeries are forced to flee their homelands, many, including Vignette, end up as refugees in a city called Carnival Row. In this new place, faeries and other creatures are not allowed to love and live with freedom, and doing so can get them killed. Philo and Vignette are reunited in Carnival Row, and they rekindle their love affair despite human society’s growing intolerance. As Philo tries to track down a dangerous murderer, Vignette hides a secret that could destroy his world.

Carnival Row comes from writer Travis Beacham, and in an interview with Den of Geek, he and showrunner Marc Guggenheim talked about how they created this new fantasy world and why they chose to set it in an industrial era. “One of the things I love about that setting, is typically, if you look at fantasy, it's typically in some sort of, for lack of a better term, medieval kind of setting,” said Guggenheim. “Lord of the Rings, which obviously, it's not medieval, but you're still dealing with people on horseback. I personally had not seen fantasy played out in this is semi-modern context. That's one of the many, many things that makes the show, I think, really unique.”

Beacham explained that he created this world with diverse, realistic circumstances in mind. “You see Lord of the Rings, and other more conservative, medieval fantasy-type things, and there's always this conservatism to them, in a way,” he told the outlet. “They all dress exactly the same, and they don't much like each other, they live over here, these live over here. There's something about, if you fast forward that world to an Industrial Revolution, suddenly, cities are getting bigger, wars are happening, and people are living closer together. You can pull them out of their comfort zones, throw them together, and begin to tell what would feel like a more modern story."

With it’s Victorian feel, forbidden romance, and mythical elements, there’s no doubt that Carnival Row is unlike any fantasy series to date. The good news is, you can dive into the whole season at once, without waiting week-to-week for new episodes.

All eight episodes of Carnival Row are now streaming on Amazon Prime Video.