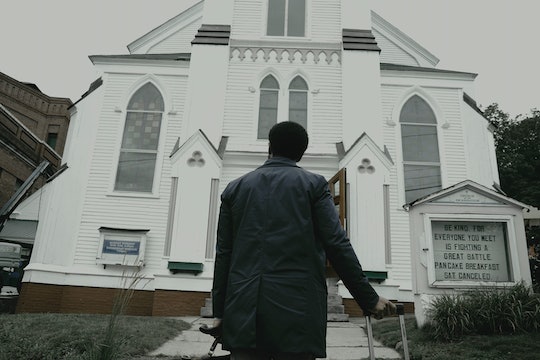 'Castle Rock' Is Getting A Full First Season

While today has been called the Golden Age of television, it is also an era in which full 24-episode seasons are harder and harder to come by — especially when it comes to prestige TV. So don't expect Hulu’s new thriller,Castle Rock to span the entire summer, fall, and winter seasons. So if you're wondering how many episodes Castle Rock is, the answer is that it's still a full season (by prestige drama standards). Hulu granted the series, which is produced by J.J. Abrams and takes place in the Stephen King universe, 10 episodes for its first season.

To anyone wondering why a show with such a prestigious pedigree wasn't given a larger order, you should know that this number of episodes for a premiere season is pretty standard for Hulu. Season 1 of Hulu’s dystopian breakaway hit The Handmaid’s Tale was also given just 10 episodes to tell the entire story. Then after the popularity of that first season, Season 2 was extended to 13 episodes. Perhaps Castle Rock will also see that kind of increase.

But first, the horror anthology has to prove itself, even though I highly doubt that’s going to be a problem with the stellar cast and classic King setting.

The show, which was confirmed by creators Sam Shaw and Dustin Thomason at Comic-Con to be an anthology series, is set in the town of Castle Rock, Maine. King fans, at least, will recognize the fictional town from his books. It has been the setting for several novels including Cujo and The Dead Zone and was referenced in Under the Dome, 11/22/63, and The Girl Who Loved Tom Gordon.

Because it is an anthology, the whole story will play out over the 10 episodes without carrying on into future seasons. So the town of Castle Rock will continue to be the focus. The story and intersecting characters will change each season, keeping the show fresh like on Ryan Murphy’s American Horror Story.

Other callbacks to some of King’s work actually comes in the form of the show’s stars. Sissy Spacek, who starred in the titular role of the original 1976 Carrie movie, plays Ruth Deaver on Castle Rock. Bill Skarsgård, who starred as Pennywise in the rebooted It, plays a mysterious prisoner at Shawshank State Penitentiary.

The first season of Castle Rock may be just 10 episodes, but that’s still plenty of time to pay homage to the town itself while the overall story unfolds. According to The New York Times, each character on Castle Rock has their own mysterious past and secrets that converge as the plot of the season unfolds. The show also allows fans of King’s work to dive deep into the universe that so many of his novels share. Anyone who loves things that go bump in the night will be into this show.

It also doesn't hurt that Abrams is one of the executive producers — thanks to Lost I will always consider him to be one of the greatest minds on TV. Castle Rock premieres on Hulu on July 25 with the first three episodes. The show will then air each new episode every Wednesday after that. I can't wait. But I will be watching with the lights on.