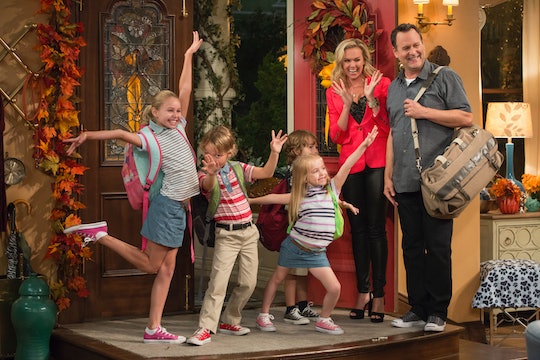 Uncle Joey Can't Stay Away From 'Fuller House' For Too Long

Fuller House is returning to Netflix for Season 3 in what feels like record time. In less than two years, the show has dropped three seasons which is a pretty impressive shooting schedule by current TV standards. And the third season got the biggest episode order yet. The series nabbed an extra-long third season with a whopping 18 episodes, compared to the first two seasons' 13 episodes each. So with all that extra time on our hands, fans may be wondering: how many episodes is Dave Coulier in on Fuller House Season 3? Keep in mind that the show's core cast focuses on the Tanner daughters.

Candace Cameron Bure, Jodie Sweetin, and Andrea Barber all return to their starring roles as the "new" Danny, Joey, and Jesse. But where does that leave us with the elder gang? The good news is that Coulier, along with John Stamos, Lori Loughlin, and Bob Saget are all set to return in recurring guest star roles. They just won't be featured in every single episode. Unfortunately, no one knows exactly how many episodes Coulier will appear in yet, since the season will be broken up into two parts.

On Sept. 22 — an important date in the Full House franchise — the first nine episodes of Season 3 will drop on Netflix. As series creator Jeff Franklin revealed on Instagram, it just so happens to be the 30-year anniversary of Full House's ABC premiere back in 1987. (Cue audience "awww!") But it has yet to be announced when the second bundle of episodes will drop.

As for what fans can expect from the season, Bure told E! News, "I've only read the first two episodes, but this whole season is going to be about summer fun." Presumably, she means the first half of the season, which makes sense timing-wise with the release date. Viewers will get to wring out the last bits of summer nostalgia just as fall gets into full(er) swing. If I were to wager a guess, I'd say that the second half of the season will likely premiere sometime around or just after the holidays, á la Season 1, and that's when fans will get the show's signature holiday episodes with the whole gang back together.

Uncle Joey had a huge character development during Season 2, in which we finally met his wife and four (!) kids, who were mentioned in Season 1, but never seen. His wife Ginger was played by country artist and Legally Blonde the Musical alum Laura Bell Bundy. And of course, their four very blonde kids are all named after comedy legends: Phyllis, Lewis, Joan, and Jerry. It's a sweet nod to Joey's standup career, which he's finally made successful in Las Vegas.

Given that he lives so far from the rest of the gang in San Francisco, it seems probable that we won't see a ton of Uncle Joey this season. Although, we do have an excuse to see him coming back for more and more visits: in the Season 2 finale, Uncle Jesse named him as the godfather to his and Becky's new adopted daughter Pamela. There was briefly some competition between Danny and Joey over who would get the gig.

One of Season 2's most memorable scenes involved the three OGs hashing out their apparent 30-year-held resentments over how moving in with Danny and helping take care of the kids upturned their bachelordom. It was a surprising argument for the normally feel-good show, but refreshing in its honesty — setting up a radical co-parenting household isn't all jokes. But the trio made up in the end, paving the way for more wisecracking to come in Season 3.