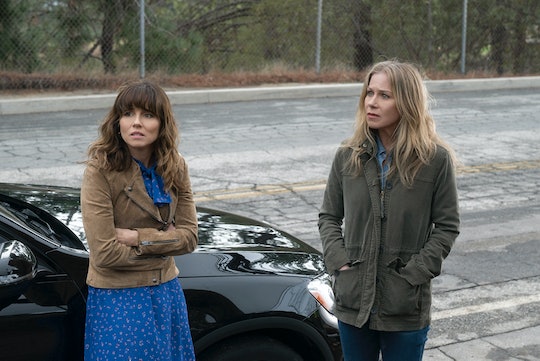 In the latest "cool shows on Netflix" news, Christina Applegate and Linda Cardellini team up for a new dark comedy, Dead to Me. Before you dive in, it's important to know the series was created by Liz Feldman and executive produced by Will Ferrell, Adam McKay, and Jessica Elbaum — meaning you'll probably laugh your butt off, despite the darker thematic tones. So how many episodes is Dead to Me (so you know whether to emotionally invest or not)? According to Deadline, Netflix ordered 10 episodes of Dead to Me.

In the press released reported by Deadline, CBS TV Studios head of comedy, Kate Adler, said when she'd heard Feldman's pitch for the series, it was "totally formed," and she let her "notebook drop on the floor because it was just such an incredible story." The show had been in what Deadline called, a "competitive situation," so Netflix had to act fast. "She told a really dark comedy that I would probably best describe as a comedic Big Little Lies," Adler continued. "It was a plot-driven, really dark comedy that was clearly not meant to be on network, it was clearly destined for premium cable, or streaming."

With such a grandiose concept and a star-studded cast to boot, Dead to Me has a lot to live up to, but if anyone can pull it off, Applegate and Cardellini are your gals. If you don't believe me, check out the trailer. I mean, it's already been out for a month.

To me it looks like all the hype surrounding Dead to Me may be spot on — especially if you like your comedy with a side of twisted (I do). The show follows two grieving widows, Jen (Applegate), and Judy (Cardellini) who couldn't be more different.

Jen is determined to figure out what really caused the car crash that brutally killed her husband. Meanwhile, Judy is more of a free spirit (cannot relate) who is coping with loss in her own way. You'd never put these two together as friends in real life, but after they meet at the support group "Friends of Heaven," that's exactly what happens and it's pure magic. The best friendships are those that compliment one another in all the right ways, even if it's a little — or a lot — twisted. Things come to a head when Judy's attempt to shield Jen from a secret goes awry. Equally brilliant in this show is the supporting cast that includes the iconic Ed Asner, James Marsden, and Brandon Scott. So honestly, you have zero reasons to miss any of the 10 episodes.

Frankly, I'm not sure 10 episodes will be enough with this one, Netflix. In the context of that two-minute trailer, I can tell I've found my next series fave before ever watching an episode. The comedy hits the right notes while still navigating grief and loss and all the quiet moments in between. Plus, there's James Marsden who will never not be absolutely dreamy. Need I say more?