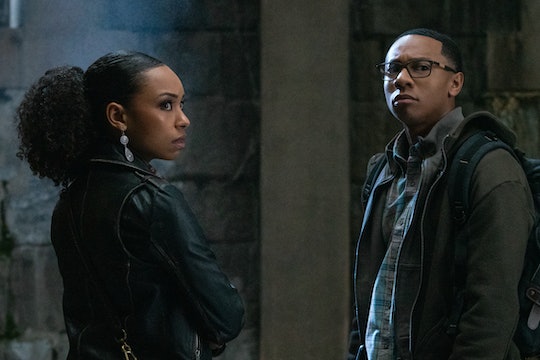 Season 3 Of 'Dear White People' Comes With Some Unexpected Changes

Dear White People is back for a third season, and it looks like there’s more drama unfolding this semester at Winchester. The show will continue to follow Sam White (Logan Browning) and her group of friends as they navigate racial tensions and relationships on their Ivy league university campus. With 10 episodes each, the last two seasons didn’t feel like they were long enough, and fans are hoping to get a lengthier season this time around. So, how many episodes is Dear White People Season 3?

The third season hit Netflix on Aug. 1 with 10 episodes, just like the first two seasons. But despite the episode count being the same, it looks like the new season is coming with a few big changes. In the Season 3 preview, Sam is handing the reins to her campus radio show, Dear White People, to her best friend Joelle (Ashley Blaine Ferguson) who claims the show has the “same title” with a “new spin."

Troy (Brandon P. Bell) is now working for the university’s satirical publication, Pastiche, and it looks like Joelle and Reggie (Marque Richardson) are officially dating. Keeping with the witty, self-aware tone of the series, the trailer also features a few meta dialogues. "People still care, but people change,” reggie says in the clip. “If everyone stayed exactly the same, life would be tedious and predictable like the third season of a Netflix show.”

As reported by The Wrap, the new season will also feature additions to the cast, including Yvette Nicole Brown, Laverne Cox, and Flavor Flav. Blaire Underwood joins the show as a charming new professor, and narrator Giancarlo Esposito finally makes a few cameos as the head of the campus’ black secret society, The Order of X.

While the show is airing with the same episode count as previous seasons, showrunner Justin Simien told Out Magazine that Season 3 is still going to be very different. “Giving people something other than what they expected is kinda my thing,” he teased. “I do it to you every time — And this season is just another example of that. I think that's kind of my thing. Expecting the unexpected is probably the best way to approach any Justin Simien endeavor.”

However, Simien noted that the show’s tone will remain the same, and Season 3 will continue to dive into the character’s interconnected storylines. “I still wanted to keep to some of our rules,” he told the outlet. “Like, you’ll notice in our show that we never cut cleanly from one storyline to another and there's always a person that has to bring us into each of the storylines. I wanted to keep some aspect of how we sort of stick to one point of view at a time because I wanted to show how interconnected all of these different people are even when they're not aware that they're actually influencing each other. I felt like there was something to say about that too. But I've never been able to say because we've been kind of in the silos of ‘This is a Lionel episode, this is a Troy episode.’”

So, while fans can expect some major changes this season, the structure and tone they love is still in tact. With the 10-episode season, I just hope showrunners do justice to all the evolving storylines, including those of the new characters.