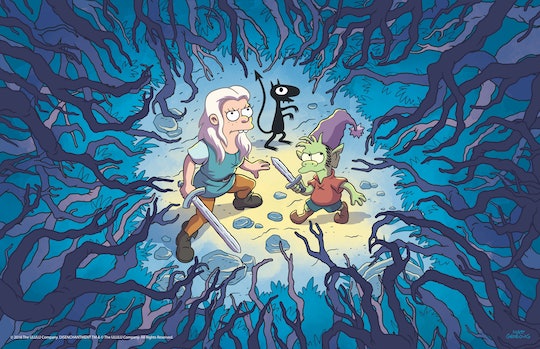 The Adventure Begins With Part One Of 'Disenchantment'

Fans of Futurama may be eagerly awaiting series creator Matt Groening's new animated show for Netflix, which is called Disenchantment. If you've been on the lookout for a new project from Groening, then you're going to want to savor this one. But to do that, you'll need to know exactly how much of it you'll have available to stream for your next marathon. So how many episodes is Disenchantment?

According to Den of Geek, there will be 20 episodes total but viewers will only get to enjoy 10 at a time. It's not clear whether that means Disenchantment will have one long season or two reasonably-sized ones. All 20 episodes were initially ordered at the same time, but the first 10 have been dubbed Part 1 on Netflix, not Season 1. It's unusual for Netflix to split up a season, but they have done it before; The Get Down only had a single season, but it was broken up into two parts that aired nearly a year apart. But while the terms might be uncertain, fans can rest assured that they will be guaranteed twenty episodes of this show.

Part 1 of Disenchantment debuts on August 17, but the premiere date of Part 2 has yet to be released.

Disenchantment is far removed from the galaxies that the characters of Futurama traversed, though its locale is equally fantastical. Express reported that the story follows a princess named Bean, voiced by Abbi Jacobson, who is more interested in drinking than pursuing her typical princess duties. She runs away from her overbearing father and the arranged marriage he tries to foist on her, instead looking to discover her own adventures in her kingdom, which is called Dreamland.

Along the way, she's accompanied by her personal demon Luci (portrayed by Eric Andre) and an elf named Elfo (voiced by Nat Faxon). Ogres, sprites, harpies, imps, and trolls all play a part, and many kinds of mystical creatures might appear as the episodes continue. There's really no limit in a world with this much magic. And in addition to its main trio, the show boasts an impressive voice cast that includes John DiMaggio, Billy West, Maurice LaMarche, Tress MacNeille, David Herman, Matt Berry, Jeny Batten, Rich Fulcher, Noel Fielding, and Lucy Montgomery

NME reported that at Comic Con in July 2017, Groening said Disenchantment was "about life and death, love and sex, and how to keep laughing in a world full of suffering and idiots, despite what the elders and wizards and other jerks tell you." That seems to tie into Bean defying her father to chase the life she really wants. It might also be an indication that the series may explore tropes commonly employed in fantasy series, but perhaps subvert or upend them slightly.

Early reviews indicate that it might get off to a shaky beginning, though. For example, Stuart Heritage of The Guardian said that there was hope the show might "grow into itself" but it still needed some time to find its groove. "There is promise in Disenchantment, but we will have to wait for it to be realized," Heritage's review stated. Metro compared the show unfavorably to Groening's past work, and noted that the humor was inconsistent. Empire pointed out that it had "a worryingly uneven start" and stumbled through its set-up.

You can decide how you feel about the first set of episodes when they're released. But even if you don't love them quite as much as Groening's previous work, don't worry: there will be 10 more episodes dropping sometime in the future that could take the show in a direction no one ever predicted.