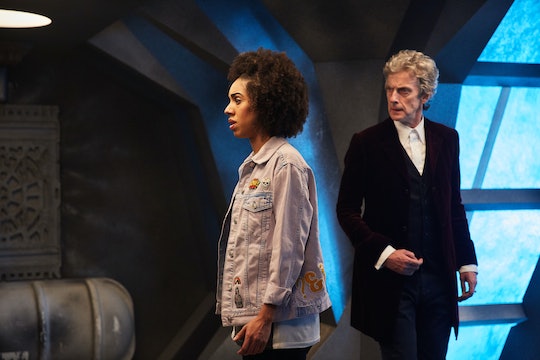 How Many Episodes Is 'Doctor Who' Season 10?

When no new season of Doctor Who aired in 2016 (save a solitary Christmas special episode), Whovians were basically up in arms at the lack of everybody's favorite Time Lord in their lives. The 12-episode ninth season wrapped up in late 2015, and the tenth (Capaldi's third season in the lead role) didn't even begin filming until June of the following year. Now that the newest batch of episodes is airing, fans are already wondering: How many episodes is Doctor Who Season 10?

Like Season 9, Doctor Who's tenth season is 12 episodes long, as is typical for the long-running show (and other British series, which generally have far shorter seasons than their American counterparts). Of those 12 episodes, seven have aired so far, with the season beginning on April 15. That episode total doesn't include last year's Christmas Day special "The Return of Doctor Mysterio" or the 2017 Christmas Day special set to air later this year (set to be directed by Rachel Talalay, who's directed the finales of Season 8 and 9 as well as the critically-acclaimed Season 9 episode "Heaven Sent").

This means viewers have just under half a season (five episodes, plus the 2017 Christmas special) left. Unfortunately, after those episodes air, it'll be time to say farewell to Peter Capaldi as the Doctor.

The Twelfth Doctor will be leaving the show after the tenth season, as he announced back in January, before the current season began airing. "One of the greatest privileges of being Doctor Who is to see the world at its best," Capaldi said during an appearance on Jo Whiley's BBC Radio 2 show. "From our brilliant crew and creative team working for the best broadcaster on the planet, to the viewers and fans whose endless creativity, generosity and inclusiveness points to a brighter future ahead. I can't thank everyone enough. It's been cosmic."

Season 10 of Doctor Who is a major creative turning point for the long-running British sci-fi series in more ways than one — because Capaldi isn't alone in departing. Steven Moffat, who has been the Doctor Who showrunner for the past six seasons, is also departing. He announced back in January 2016 (months before Season 10 began filming) that he is stepping down as the show's lead writer and executive producer. Season 10 is his last as showrunner, and Broadchurch writer Chris Chibnall will be taking over for the 2018 season.

There's no word yet who might be replacing Capaldi as the thirteenth incarnation of the Doctor, but one thing's for sure: his unique interpretation of the character will definitely be missed.