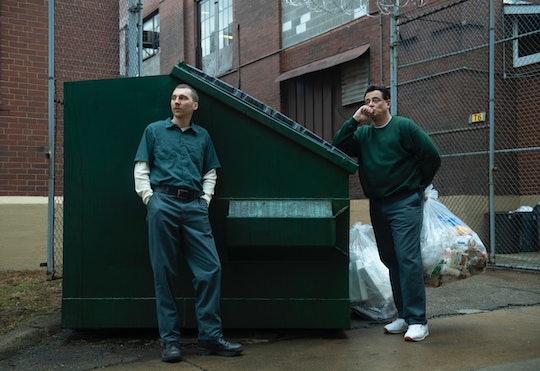 Here's How Many Episode 'Escape At Dannemora' Has

Showtime's latest miniseries Escape at Dannemora has all the makings of an awards season darling: an all-star cast, a high profile producer in Ben Stiller, and a riveting true crime backdrop. The series is artfully directed by Stiller himself, and pretty addictive, so viewers may be wondering: how many episodes is Escape at Dannemora? The incredible story plays out across just seven episodes.

The series follows a 2015 prison break from Clinton Correctional Facility, the first in the compound's 170-year history. Inmates David Sweat (played by Paul Dano) and Richard Matt (Benecio Del Toro) each begin a sexual relationship with an inmate supervisor named Joyce "Tilly" Mitchell (Patricia Arquette). Matt, sensitive to the fact that Tilly appears to be deeply enamored with Sweat, manipulates her into bringing the two men supplies to break out of the prison. He promises her that the three of them will run away together, away from her boring life with her husband Lyle, and eventually make their way to Mexico.

Joyce Mitchell really did smuggle hacksaw blades purchased at Walmart into the prison in blocks of frozen hamburger meat as depicted in the series. Matt and Sweat then used those blades to cut holes around vent grates in their prison cells and crawl through the prison's ventilation system, mapping out their escape. At one point, they were seemingly thwarted by an 18-inch steam pipe, but since it had been turned off for the summer, Sweat was able to saw through it in two places, giving the prisoners a path to freedom.

Mitchell was supposed to help the men on the night of their escape by picking them up in her jeep and bringing them more supplies, including weapons to murder her husband and dispose of his body. She was to drive them back to her house so they could kill Lyle before heading south to a safe house. But she got cold feet at the last minute, and couldn't follow through with the last stage of the plan, leaving Matt and Sweat to escape on foot.

"I didn't want anything to happen to Lyle and I couldn't imagine being without him," Mitchell said in a statement at her sentencing hearing, according to CNN. "I believe I helped Inmate Matt and Inmate Sweat escape because I was caught up in the fantasy. I enjoyed the attention, the feeling both of them gave me, and the thought of a different life."

Without Mitchell's getaway car, the men were forced to hide out in the surrounding area, and with the significant resources that went into the three-week-long manhunt it took to catch them, the men were eventually apprehended. Sweat was recaptured alive, while Matt was shot and killed by police after refusing to surrender.