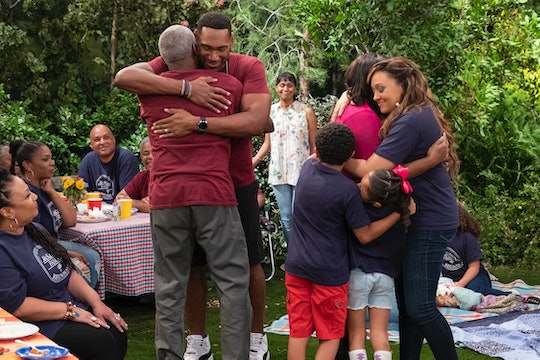 Prepare for a summer of laughs, love, and life lessons with Netflix’s new original series, Family Reunion. The sitcom, which begins streaming Jul. 10, follows a big city family that picks up and moves to the South to live with their relatives. The show is a refreshing watch for the whole family, and if you’re trying to schedule it out for the summer, you may be wondering how many episodes Family Reunion is.

Part 1 of the series hit Netflix with 10 half-hour episodes, and as of now, there’s no official word on when Part 2 will drop. The sitcom — which was taped in front of a live studio audience and comes from Fuller House and Family Matters producer Meg DeLoatch — introduces viewers to the Seattle-based McKellan family and their hilarious Southern relatives.

From the importance of church, to the strength of family bonds, Family Reunion captures the black family experience with grace and authenticity. According to Deadline, DeLoatch assembled an all-black writing team to bring a genuine feel to the McKellans and their experiences. “I am extremely proud of this show,” DeLoatch told the outlet. “It is a true collaboration, with everyone on this production, from the cast and writers, to the directors, staff and crew, contributing personal stories and traditions to help make our family dynamic and relatable.”

In an interview with People, Family Reunion star Tia Mowry talked about how refreshing it is to be a part of a show that is based on real-life experiences. “These aren’t just ideas that are coming from people that think that this is what it’s like, these are ideas and story lines that are being told from people who’ve actually lived out the story line,” she said. “There’s this raw, rooted, grounded authenticity, that is being portrayed in the pages and the story lines. We had 20 scripts, and I was so excited to read every single one of these scripts, because of the stories that were being told.”

Mowry added that she was excited to be on a show that promotes family values and isn’t afraid to cover issues like race and identity. “It’s just really refreshing and really rewarding for me,” she told People. “When there is family programming, and it brings the family together, it creates memories, it creates bonds, it creates and sparks conversations, especially with this show.”

In a political and cultural climate that is increasingly polarizing, it’s refreshing to see a show that is covering the important issues, but doing it in a positive and funny way. Part 1 of Family Reunion is endearing, hilarious, and inspirational, and it may just add a little more light to your summer.