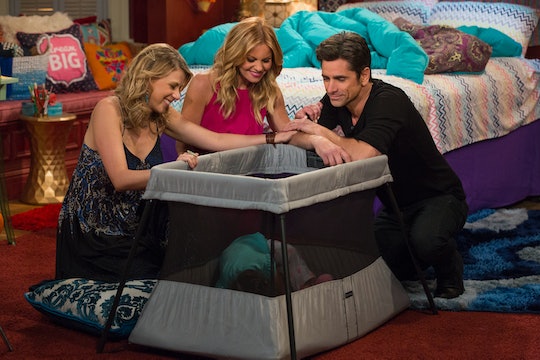 'Fuller House' Season 3 Is Shaking Up Its Netflix Format

The new season of Fuller House is here and fans can't wait to see what the Tanners are up to now. This season will be all about summer fun, which could mean a lot of different things for the family, but mostly it'll mean a very entertaining season. So how many episodes is Fuller House Season 3? In total, there are 18 episodes, but only the first half of the season has been released on Netflix.

This is most likely due to the fact that the family-friendly franchise wanted to pay homage to its roots. Because Sept. 22 doesn't only mark the start of the third season; it also marks the 30th anniversary of the premiere of Full House, the original series. Cameron Bure, who stars as D.J. Tanner, noted the momentous occasion on her Instagram back in June, sharing a throwback pic of the original Full House cast.

It's unclear if the premiere episode of the season will celebrate the anniversary or not, but now that the show's producer, Jeff Franklin, owns the "real" Full House house, it'd be cool to see it used on the show this season. However, back when the house was purchased, Jodie Sweetin, who plays Stephanie Tanner, told People magazine that the house probably wouldn't work as a set. "Just so you all know, the house looks nothing like the set," she said. "There's no way that, like, 12 of us could live in this house — but we're going to try!"

Regardless, it'll be great to see the Tanners again and witness what they've been up to since the last season. One major change is Stephanie will be rocking a cast this season, mainly because the actress playing her had an accident before filming commenced. Sweetin broke her ankle and tibia in multiple places earlier this year when attempting to retrieve a toy for her daughter, Beatrix.

Although Sweetin is now out of her cast and walking on two feet again, her character Stephanie will be hopping around for at least the first half of this season. "There's no hiding that I can't walk," Sweetin told E! News back in June. "And I can only be a houseplant in so many episodes where I'm just stuck somewhere."

Thus, her injury was written into the show, though it has yet to be revealed how exactly Stephanie ends up getting hurt. Regardless, it seems the character may miss out on some of the Tanner's summer fun this season. Hopefully, since Sweetin got her cast off a few months ago, Stephanie won't be out for the entirety of Season 3.

Although the first nine episodes have debuted, the last nine episodes don't have a release date yet, and based on the cast's social media pages, they only just wrapped up the season. Therefore, unless they extended Stephanie's injured story for the sake of the show, she should have her cast off, like Sweetin, in the second half of the season. But fans will just have to wait and see how that works out on the show.

One thing I do know, at least based on the promo pics for the season, is Kimmy's little brother and Stephanie's love interest, Jimmy, will be there to help her get around. It also appears that while Stephanie will be hopping around on crutches, she definitely won't miss out on all the fun.

As for what the other Tanners are up to this season — well, you'll just have to watch the first nine episodes and see for yourself.