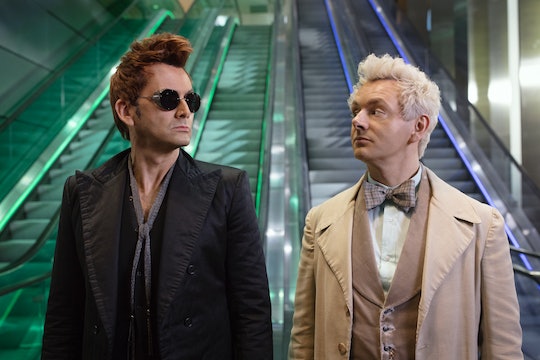 Neil Gaiman and Terry Pratchett are bringing their 1990 novel Good Omens: The Nice and Accurate Prophecies of Agnes Nutter, Witch to life in their new Amazon/BBC series. Full of celestial characters and apocalyptic prophecies, the show has quite a big story to tell. If you’re trying to gauge how long it will take you to finish the series after it premieres this weekend, you’re probably wondering: how many episodes is Good Omens?

The series — which premieres on Friday, May 31 on Amazon Prime Video — will air with a total of six episodes. As reported by Entertainment Weekly, when talking at SXSW earlier this year, Gaiman revealed that the show is complete and will not go beyond this one season. “The lovely thing about Good Omens is it has a beginning, it has a middle, and it has an end,” he said. “Season 1 of Good Omens is Good Omens. It’s brilliant, it finishes. You have six episodes and we’re done. We won’t try to build in all these things to try to let it continue indefinitely.”

Good Omens tells the story of an angel, Aziraphale (Michael Sheen) and a demon, Crowley (David Tennant) who, while spending time on Earth as agents of heaven and hell, end up falling in love with their life on the planet. Now, knowing there is an impending apocalypse, the two find a way to work together to save the world they’ve grown so attached to.

In a 2014 piece he wrote for the BBC, Gaiman discussed how he and Pratchett came up with the idea for Good Omens: The Nice and Accurate Prophecies of Agnes Nutter, Witch. He revealed that his love for Richmal Compton's Just William stories and his affection for the movie The Omen inspired him to write the first 5,000 words of the novel. Upon reading a draft, Pratchett offered to work with him.

As reported by Deadline, ahead of the Good Omens premiere, in a Q&A this week, Gaiman revealed that he began writing the episodes for the series after Pratchett passed away. “Terry Pratchett asked me about five years ago, he wrote me a letter, he said ‘you have to make this into a television show and I want to watch it… before the lights go out’,” he explained. “I said ‘yes’ and then Terry died and I flew home from his funeral and started writing episode one at a time when nothing seemed very funny. I wrote it for him, missing him whenever I got stuck, because he’d get me out of trouble and missing him whenever I did anything clever, because I wanted to tell him about it. Then I became showrunner, because I promised that I would make the thing that he would have loved and that process can’t end by handing in the script.”

Good Omens was a passion project for Gaiman and Pratchett, so it makes sense that the series is being kept limited to their vision. There’s no doubt that it’s going to be an exciting watch, and fans will just have to make the most of this six-episode series.