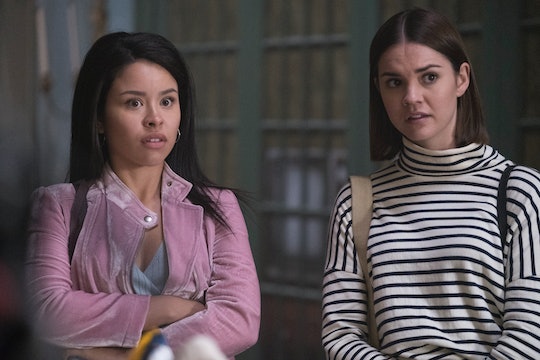 Fans of The Fosters are getting ready to celebrate 2019 with Freeform’s new spin-off series, Good Trouble. The show follows Mariana and Callie as they move to Los Angeles to start their lives together, and will see the return of other beloved characters as well. Fans are hoping for a long season to get them through to summer, but exactly how many episodes is Good Trouble?

According to Freeform, Good Trouble will air a total of 13 episodes for its debut season — which premieres on Tuesday, Jan. 8. The series will pick up with Mariana and Callie where The Fosters left off, and will follow them as they try to navigate L.A. life as adults. The two move in to The Coterie in Downtown L.A., and they quickly learn that adulting isn’t as easy at looks. As they settle into their new home, new relationships, and new jobs — Callie is clerking for a federal judge and Mariana is working at a tech startup — they realize how challenging life can get, but they depend on each other to get through it.

In an interview with Variety, The Fosters and Good Trouble executive producer Joanna Johnson said that while the new show focuses on Callie and Mariana, it will still feature the family feel you loved from The Fosters. “When you leave home, you go out in the world and you create your chosen family of friends and people that you work with, and that’s what this show is about,” said Johnson. “It’s still a family show, but it’s the family you choose to surround you and support you.”

Johnson also revealed that that communal meals — similar to the family dinners in The Fosters — will play a big part in Good Trouble, and fans can expect to see characters cooking and eating together while they talk about life, relationships, and politics. She said she used L.A.’s trendy communal living spaces as inspiration for The Coterie so that it could add to the series' sense of family. “In The Fosters, the kitchen table was so important,” she said. “They would sit around the table and be all together, and we wanted that again.”

While the 13-episode season of Good Trouble won’t take you into summer, it will definitely carry you through to spring. It will be exciting to dive back into the lives of characters you’ve grown to love, and hopefully you’ll get to see more of them on subsequent seasons to come.

Good Trouble premieres on Tuesday, Jan. 8 at 8 p.m. on Freeform.