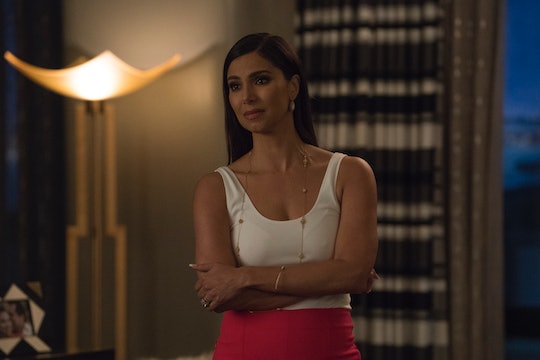 'Grand Hotel' Has Quite A Few Scandals To Unravel

ABC's Grand Hotel is an adaptation of the Spanish drama Gran Hotel that brings all the familial backstabbing and class issues to modern-day Miami Beach. Over the course of the first season, viewers will get to look behind the glossy facade of the Mendoza family to the drama that lurks under the surface. But how many episodes is Grand Hotel? You'll need to know exactly how long you have to get to the bottom of the show's many scandals.

According to NBC News, Season 1 of Grand Hotel will be 13 episodes, airing weekly every Monday on ABC. Each episode follows the Mendoza family, who own a massive hotel called the Riviera Grand based on the real life Fontainebleau Hotel in South Beach. There's patriarch Santiago (Demian Bichir), who has gotten remarried to his late wife's bestie Gigi (Roselyn Sanchez), a decision that doesn't sit well with their adult children. Santiago's first wife Beatriz is played in flashbacks by the show's executive producer, Eva Longoria. The drama extends into the next generation, too: Santiago and Beatriz's adult kids Alicia (Denyse Tontz) and Javi (Bryan Graig) get into plenty of trouble of their own, according to TV Guide. Gigi's children Carolina (Feliz Ramirez) and Yoli (Justina Adorno) are sure to get embroiled in the shenanigans, too.

And that's just the main family. The people who work at the hotel are involved in the goings-on behind closed doors too, adding another level to all the scheming and sneaking around. Executive producer Ben Spector told Deadline that everyone at the hotel had a secret, and viewers were in for some "juicy reveals" as the season unraveled.

One of the show's actors confirmed that during a chat with NBC News. Shalim Oritz plays the hotel's manager, so he probably has a pretty good overview of everything happening within its walls. According to him, Grand Hotel appears to be populated with antiheroes, which should make for some interesting storylines.

Though the producers and actors promise that the characters will face all kinds of delightful problems in Grand Hotel's first season, they've steered clear of spoilers. And that's probably for the best — nothing ruins a late night soap like having its shocks and surprises spoiled ahead of time. But the trailer does offer some hints. There will be financial trouble and secret affairs, as well as a few undisclosed skeletons in the closet. And Entertainment Weekly reported that a hotel worker goes missing, as well — proving there's a lot lurking around the Riviera Grand's opulent corners.

Thirteen episodes might not be enough to contain everything happening on Grand Hotel. It sounds like some of these stories might be too complex to tie up in a knot by the end of Season 1. Here's hoping the show doesn't end on a cliffhanger.