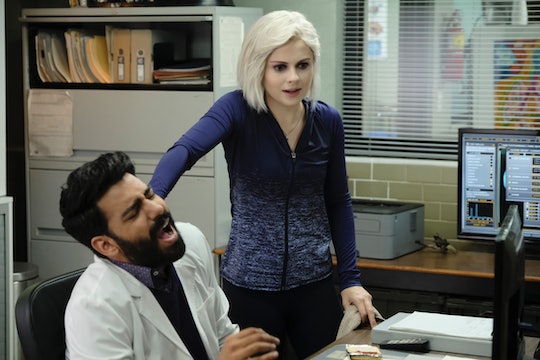 It's Time To Say Goodbye To Your Favorite Brain-Chugging Zombie

Last year, The CW announced that the fifth season of iZombie would be its last, which means this is the end of the line for your favorite brain-eating med student. Fans have been with Liv from the beginning of her zombie journey, but with only one season left, viewers are dying to know how much time they have left with her. So how many episodes is iZombie Season 5?

Just like the last three seasons, iZombie will air with 13-episodes for its fifth and final season. The show — which is based on a comic book series of the same name — will pick up where Season 4 left off. The world at large knows that zombies exist, and as the leader of the Renegade movement, Liv is trying to make sure that humans and zombies get along.

In an interview with Variety, showrunner Rob Thomas teased that Liv will have bigger fish to fry this season than she has in the past. “She’s going to keep bringing people into Seattle [but] it’s a bit different in terms of the people they’re worried about now,” he revealed. “Fillmore-Graves is no longer preventing people from coming into the city [so] now instead of going against Fillmore-Graves, they’re really going up against the U.S. Army. So, their opponent in that has changed, but her mission hasn’t — Also, now that she is so public, her business model has changed. Instead of operating out of that motel room, they have a safe house that’s in a top-secret location because she knows she’s now a target, so the security protocol for Liv has become much more extensive.”

With the stakes getting higher for Liv and the series coming to a close, many fans are wondering if the show will end with a zombie cure or an all out apocalypse. Thomas hasn’t divulged any details on how it will end, but when talking to TV Line, he did mention that the story would mirror the societal divide seen in the country today. “I’m not always trying to do the show as a parable or anything, but it did feel reflective of what’s going on in America,” he said. “It’s a very fractured society, and there are people way out on both sides, and the question here is: Will society — the humans and zombies in Seattle — be able to live together peacefully? That’s certainly what the heroes of our show are working on.”

Thomas also explained that the final season will tie up all its different storylines, so that fans are left with closure when the series ends. “Well, the thing I will say is after this season wraps, I do not feel like we could go any longer,” he told TV Line. “We really end the show this time. It’s like the first time in my career I’ve gotten to know when the end was going to be, and we wrote to it. We pretty much tied up everything. There might be one kind of lingering question at the end, but I think fans will be satisfied with the level of completion we brought the show to at the end of this season.”

It won’t be easy to see iZombie go, but hopefully, with 13 episodes, fans will have enough time to say goodbye to Liv and her friends.

iZombie premieres on Thursday, May 2 at 8 p.m. ET on The CW.

Editor's note: an earlier version of this article misidentified the name of the character, Liv. It has been corrected.