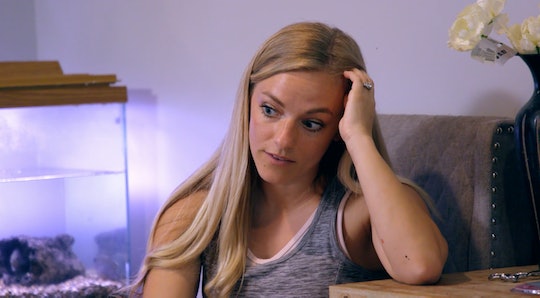 Teen Mom OG, currently in its eighth season, is bringing back a familiar face for viewers who stuck with the original 16 and Pregnant through its later seasons. Mackenzie McKee makes her return on the Aug. 5 episode, but how many episodes Mackenzie is in on Teen Mom OG remains to be seen. She was first spotted in a midseason teaser released in July, so viewers knew she was making a comeback. But she wasn't part of the main cast, so details on her return are hazy.

People reported in July that Mackenzie was "being considered to join the cast full-time" by MTV, and that her appearance on Season 8 was something of a trial run for a potential full-time gig. The 24-year-old YouTuber and fitness entrepreneur will appear in "a few episodes" toward the end of Season 8 and she'll also be included in the Season 8 reunion show. Reports first surfaced in February 2018 that Mackenzie was being brought in to replace star Farrah Abrams, who left the show after an alleged bitter fight with production over her decision to work in the porn industry. Instead, Bristol Palin was brought on in Season 7, but she, too, opted to leave the show after just one season. So, it would appear that Mackenzie now joins Season 8 as a sort-of audition to be Palin's full-time replacement.

If you don't remember Mackenzie from the original, it might be because she was slightly after your time. Her first appearance on 16 and Pregnant wasn't until Season 4, in 2012, which chronicled the arrival of her first son Gannon Dewayne in 2011. (Mackenzie's episode memorably featured her trying on her cheerleading uniform with full baby bump.) She went on to star on Teen Mom 3, the shortest-lived series in the franchise, along with Briana DeJesus, Alex Sekella, and Katie Yeager. It was canceled after just one season.

Mackenzie married Josh McKee, Gannon's dad and her high school sweetheart, in 2013. They welcomed daughter Jaxie Taylor on Feb. 7, 2014 and son Broncs Weston on Aug. 15, 2016. And from the looks of her Teen Mom OG debut, the family also managed to acquire an enormous Harlequin Great Dane named Hank along the way.

For those of you who do remember Mackenzie, you may recall that part of her 16 and Pregnant storyline revolved around how she had to give up cheerleading, while her boyfriend Josh ostensibly had to give up bull-riding to raise their child. But as her Teen Mom OG sneak peek reveals, Josh is still very much involved in rodeo.

Mackenzie seems to have her hands full over the summer when the kids are out of school, realizing she can't juggle parenting and working from home while Josh is on the road for months at a time during rodeo season. Meanwhile, she's also dealing with her mom's Stage 4 lung cancer, which has metastasized to her brain. It sounds like there's a lot of Mackenzie's story left to tell, so barring some major development, it seems like she's a shoo-in for a full-time cast member. You can catch her on the rest of this season when Teen Mom OG airs Monday nights on MTV.