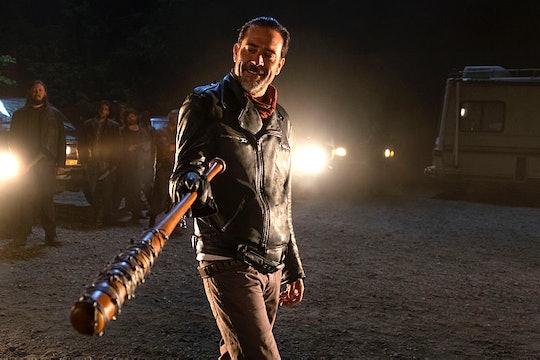 How Many Episodes Is Negan In On 'The Walking Dead'? He's Not Going Anywhere

Negan has become a polarizing figure on The Walking Dead very quickly, which comes as no surprise since he slaughtered a much-beloved character (and also Abraham) right out of the gate. He's turned an already bleak world into something even bleaker and in the process broken Rick far beyond anything fans have seen before. There's also the relentlessness of his hammy monologues, which somewhat undercuts his much-hyped scare factor. Negan has only been in three episodes since the show returned for Season 7 but his presence feels a lot more oppressive than his screen time would suggest. If you're as exhausted by Negan as I am, you may be wondering: how many episodes is Negan in on The Walking Dead?

If you're a massive Negan fan, then you're in luck; if you're not, then you and I are going to be settling in for a long, painful haul, my friend. Negan is credited for every episode of Season 7, but his reach will stretch even beyond that. On The Howard Stern Show, actor Jeffrey Dean Morgan confirmed that he was also on board for Season 8. And even though Negan's appearances have been spotty so far in Season 7, you're going to see a lot more of him going forward. According to Morgan, the next two episodes ("Sing Me A Song" and "Hearts Still Beating") are major episodes for Negan.

It makes sense that Negan will only take on greater significance in the show because he's also a big part of the comics, where he was ultimately defeated but not killed. Instead Negan spent time in an Alexandrian prison before busting out, which was when he infiltrated a rival group called the Whisperers and killed their leader. Eventually he became a tentative ally by joining Rick's militia in the fight against the Whisperers. While a long lifeline in the comics is not necessarily a guarantee on the show (just ask Andrea), it seems there is a lot of story left that The Walking Dead wants to tell with Negan.

Knowing that Negan will be back for Season 8 makes at least one thing clear: he will live through the season. Whatever happens this year, he's going to survive at least that long. So whether he ends up a prisoner in Alexandria by the Season 7 finale or not, it's clear that his time on the show is just getting started.