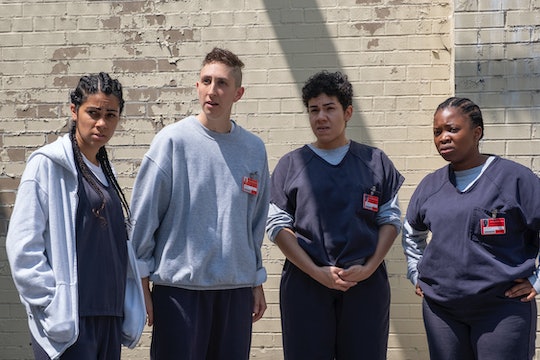 'OITNB' Season 7 Will Be A Satisfying Conclusion

Any television series that has run just a touch past its prime these days is subject to a somewhat rushed, truncated final season (see: Game of Thrones). Orange Is the New Black definitely suffered a post-Poussey slump in quality, so it would be reasonable to wonder how many episodes OITNB Season 7 is, considering its the long-running series' last season. In a surprising move, Netflix's second-ever original series (after House of Cards, both of which debuted in 2013) will finish strong with its customary 13 episodes, according to TV Guide.

Largely responsible for putting Netflix on the map back when it was first dipping its toe into original content, OITNB claims the unofficial honor of being Netflix's most-watched show. Although the streaming service infamously refuses to release ratings information, Netflix has offered the statistic that 105 million users have watched at least one episode of OITNB, according to Variety.

Season 7 tackles a dual inside/outside perspective, following series protagonist Piper Chapman as she ventures outside Litchfield after her release. It also introduces new characters via the for-profit prison's new ICE detention center, where Blanca gets sent in the gripping Season 6 cliffhanger finale. And, of course, Season 7 offers up satisfying, if not always happy, endings for the inmates fans have grown to love. After all, Piper still has a relationship with Alex, who's still inside, to maintain.

Natasha Lyonne, whose triumphant Hollywood comeback began with her beloved turn as Nicky Nichols on OITNB, returns to not only star in the final season, but also direct. Fresh off the success of her own Netflix series Russian Doll, which was just nominated for 13 Emmy Awards, Lyonne is among OITNB's proudest alums.

"If it wasn't enough to love and know everybody so intimately as an actor, to watch them be so brilliant at the monitor and from a distance and to get to work with the writers and our incredible crew behind the scenes in that way was just like a further reminder of how singular that show is," she told Insider in January, acknowledging that the final season would be "heartbreaking.

OITNB has been nominated for 19 Emmys over the past six seasons, including a surprise second nomination this year for Laverne Cox. She made history back in 2014 as the first openly trans person ever to be nominated for an Emmy, though no openly trans person has ever won. Uzo Aduba is the only person to take home an acting Emmy for her work on the show; she's won two Supporting Actress Emmys for playing Suzanne in 2014 and 2015.

More Like This
The Office Halloween Episodes: A Definitive Ranking
'The Proud Family: Louder & Prouder' Is Returning For Season 2 On Disney+
School Is Back In Session! 'Abbott Elementary' Was Officially Renewed For Season 2
'Workin’ Moms' Season 7 Is Reportedly In The Works! Here’s Everything We Know