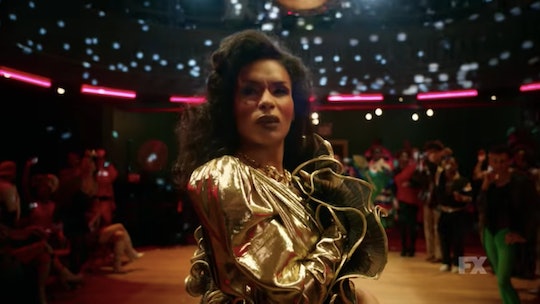 Here's How Many Episodes Of 'Pose' We're Getting

Though most television shows used to have sprawling seasons of 20-plus episodes, that format has been left almost entirely in the past. Ten to 13 episode seasons are in vogue now, especially on networks like FX, which often has high quality but limited series. Their newest offering, Pose, will have a similarly short debut — but how many episodes is Pose, exactly?

In December 2017, Deadline reported that Pose received a full season order of eight episodes, which will begin airing on June 3, 2018. That gives it just enough time to tell a concise story about a very specific time in New York's history, jumping between greed-is-good 1980s luxury and drag subculture, where queer and trans youth found a way to forge new lives for themselves against all odds. Pose also boasts some historical casting: it features the most trans series regulars and LGBTQ characters on a show to date.

The show was created by Steven Canals originally and then developed with co-creators Ryan Murphy and Brad Falchuk, two FX regulars with countless shows on the network under their belts. Murphy and Falchuk will be producing and writing as well (Murphy directs the first two episodes, too) with Janet Mock and Our Lady J joining the team as writers and producers.

Following the show's season pickup, Murphy released a statement reported by Deadline in which he said:

I am thrilled to join forces with John Landgraf and FX Networks and FXP and Dana Walden, Gary Newman and Fox 21 Television Studios to present what I think is a game changer of a show, which at its heart is an uplifting series about the universal quest for identity, family and respect. Along with being a dance musical and an affirming look at American life in the 1980s, I’m so proud that Pose and FX has made history right from the beginning by featuring the most trans series regular actors ever in an American television production. Additionally, the first season Pose will feature 50-plus LGBTQ characters — a record in American television history. I can’t wait for people to see this incredibly talented, passionate cast.

Pose has a lot of ground to cover in just eight episodes, with several different stratospheres of society to explore and more than a few main characters to follow. It tells a fictionalized story but has to make sure to be authentic as well, since the show is set within a very real subculture during a real time period. To that end, consultants were brought in: according to another Deadline article, ball culture experts Michael Roberson and Twiggy Pucci Garçon will be there to make sure everything stays true, as will Hector Xtravaganza, Skylar King, and Sol Williams. They were there when these stories were unfolding in the real world, so their point of view is a necessity.

And while the cast in front of the camera is breaking new ground, so is the crew behind it. Ryan Murphy previously launched the Half Initiative, a program that seeks to give people of color and women more opportunities in film and television. Through their Director Mentorship Program, Pose will be working to bring emerging transgender directors to the series.

An ambitious and intriguing series, Pose has a lot to do in the time it's been given. It's still unclear whether the show will end with its first season or continue on to a second; it can be difficult to predict a show's future so early in its run. There have also been conflicting reports about whether or not the series will be an anthology like many other Murphy collaborations with FX. Variety initially said it would be, but Collider reported otherwise. But regardless of what Pose's future holds, its present is exciting enough.