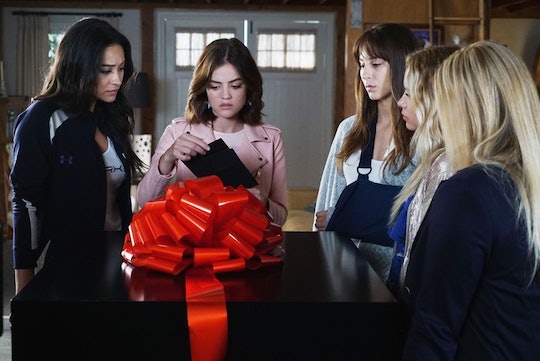 The end of Pretty Little Liars is almost here. The seven-season-long mystery drama is coming to an end this year and fans still can't believe it's almost over. The final season begins on Tuesday, April 18, but many fans are wondering how many episodes is Pretty Little Liars' final season? The show will close out 7B with 10 episodes, which may not feel like enough for fans, but thankfully the series finale will be two hours long.

Pretty Little Liars began almost seven years ago when show creator I. Marlene King decided to bring these characters from Sara Shepard's bestselling series to life. Those characters were Spencer Hastings (Troian Bellisario), Hanna Marin (Ashley Benson), Aria Montgomery (Lucy Hale), Emily Fields (Shay Mitchell), and Alison DiLaurentis (Sasha Pieterse). Over the years, King — along with the cast — has made these characters their own, straying from the novels to make their own stories, and it's worked incredibly well for them.

The show has, of course, seen it's highs and lows — the latter of which includes the highly debated Spencer and Caleb coupling that took many diehard Haleb 'shippers by surprise. Still, overall, fans have consistently tuned in each week to follow the murder mystery show as they, along with the characters, desperately try to figure out who is tormenting these poor Liars.

Though fans remain skeptical, King and the cast promise the final episodes will explain everything. Every mystery, every murder, and most importantly who has been tormenting the girls for so long and why. However, don't expect the answers to come easy.

According to Huffington Post, King promised the crowd at PaleyFest that the series finales will include a "huge twist," so be prepared to be shocked until the very end. Anything could still happen in these last episodes and with King it's best to always expect the unexpected. Fans should also prepare themselves to be heartbroken by the "Uber A" reveal. On Twitter, King revealed to a fan that the reveal of A.D. will be sad because "every villain has a real human story." What does that mean?

As always, fans won't really know until the episode airs. No matter what happens, though, it will be sad to say goodbye to these characters that many fans have come to know and love. Pretty Little Liars has taken us on a wild ride filled with murders, plot twists, drama, and some of our favorite 'ships. While there will always be other shows, nothing will ever compare to the addictive insanity that was PLL.