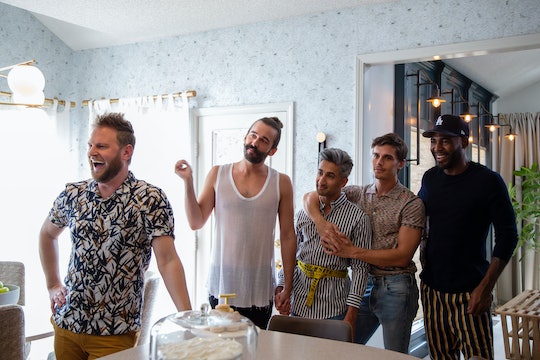 If you're a huge fan of The Fab Five (aka the Queer Eye crew), you've probably been counting down the minutes until the Season 3 release. Of course one of the great gifts of Netflix is that you can typically count on getting an entire season all at once — which means clear out your weekend plans in exchange for something a little fabulous. In case you aren't sure how much time to devote or how many episodes Queer Eye Season 3 will bless you with, I've got you covered.

It looks like Netflix is rolling out eight full episodes of Queer Eye right off the bat. That means once you've streamed the first two seasons to get caught up, Bobby Berk (interior design), Antoni Porowski ( food and wine), Jonathan van Ness (grooming), Tan France (fashion) and Karamo Brown (culture) will liven things up for Season 3 in the new location of Kansas City, Missouri after leaving Season 2's Atlanta, Georgia. As a reboot of the beloved original Queer Eye from the early 2000s, the new Fab Five aim to celebrate diversity through their makeovers in some of the quieter places around America, as opposed to New York City.

Bobby Berk told Variety Season 3 will show an even number of male and female makeovers, whereas Seasons 1 and 2 skewed toward men, saying, "No offense to men, but we have so much more fun with women." Tan France even said there will be a first-ever Queer Eye makeover on a lesbian this season which is completely awesome. In terms of the tear-factor, expect plenty of those with your Queer Eye crew. Antoni Porowski told E! News:

Inclusivity and diversity continues to be the focus of our MO, of what we’re out there to do. I think people are going to se a lot of differences in Kansas City, but they’re going to see maybe more and understand a little more clearly that we are all the same, our struggles are the same, to show up for our families, to be better lovers, friends, parents children, like these are all human experiences. It doesn’t matter which coast or which country you’re in, it’s all something you can relate to.

He followed by saying he tried not to cry as long as possible, but that didn't go well. "Before the season started, I actually had a conversation with myself where I was like, don’t cry as much as you did in the first season, and like, try to make things that are a little more complicated." Relatable.

It doesn't matter why you tune in to watch the Fab Five do their magic. Maybe you want Karamo to look deeply into your eyes and convince you to reforge your relationship with your long-lost step-brother. Maybe you wish Bobby would come to your house and spend a week making it into the zen retreat you always knew it had deep down inside it. Maybe you want Jonathan to explain the importance of exfoliating while gently running his fingers through your hair. Maybe you just need a good cry.

Whatever you need, the Fab Five are back and ready to lift you up, henny.